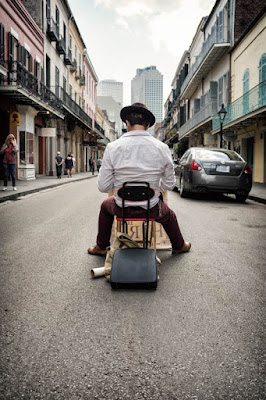 My a.c. quit cooling yesterday.  Not completely, just mostly.  We were able to have mother's day lunch, but the temperature in the house kept going up.  Ili wondered if the unit had frozen up.  I went outside to look, but she said that the part that freezes is the one in the attic.  I don't know shit about anything, including air conditioners, but I resisted her suggestion.  I changed the filter at the intake vent, and it looked dirty but not that dirty.  Ili said it was that dirty.  I said I had changed it a month ago, but she said no, it had been two months.  Whatever.  Even with the new filter, the temperature kept going up.  I would look at the drain pipe outside from time to time to make certain water was still dripping which meant that the a.c. unit was doing something.  I could tell, though, that the amount of moisture being taken from the air inside the house was lessening.  By seven-thirty, as we were cooking dinner on the grill burner outside in an effort not to heat up the house, I decided to turn the a.c. off so that any ice that might have formed on the unit (we never found any) could melt.  I had gone online and found that there are only two things that can make a unit freeze, a dirty filter and a freon leak.

We were fortunate last night, though, as the heat of the day dispersed rapidly.  We ate outside and had a lovely time of it until the mosquitoes started eating me up.  We took a scooter ride in the dwindling light.  The Boulevard was unusually busy.

We came home and watched t.v.  It had been an hour and a half, and so we decided to turn the a.c. on.  The house began to cool.

I, being proactive, had already called for repairs.  Now here comes the sad part of the story.  When I moved in so many, many years ago, the old man who sold the house left the names of his repairmen.  When I had the a.c. unit serviced back then, two fellows showed up.  Mack and Gary.  They were quite a pair.  They showed up in a van with the name of the company on the side.  It was incorporated into a Dixie flag.  The neighbors must have thought I had friends in the KKK.  But you have never met two nicer guys.  They worked slowly.  They hummed and whistled and stopped to talk.  They were never in a hurry.  They had already been working on the a.c. for years before I bought the house.  They said they knew it well and they told me about the people who had lived in the separate garage apartment.  They were honest and charged about half of what other people would charge.

I recommended them to others.  They did work for my mother and she recommended them to her friends.  They were the sort who would repair what others wanted to replace.  They were honest and saved people money.  They always talked about the owner of the company, but that didn't make sense.  Why would an owner let these two go to calls together and charge so little.  Gary was a big fellow, as tall and thick as Mack was skinny.  They were disheveled and the stories they told me about their lives were of the working class.  They lived in mobile homes.  Gary's wife had left him.  Mac never talked about a wife.  I tried to imagine their non-working lives.  They looked like the sort who like fishing and hunting.

One day, Mack got sick.  He had skin cancer of the worst kind.  He kept working, but he was slow.  And then he died, and there was only Gary.  He would show up in his truck alone and do the work, but he seemed incomplete somehow.

One day, I got a letter that said the company had been sold.  The letter's author said he had known the owners for many, many years.  Mac and Gary.  I knew it.  I knew they owned the company.  Why they didn't let on about that is a mystery, but I assume they had their reasons.

The company I will hire now will be a good one, but they will be expensive and they won't be as ready to repair as to replace, I think.  Old Mack and Gary.  They worked on my air conditioners for over twenty years, and they worked for the other owner longer than that.  I had dreams about them last night, I think.

This morning, the house is cool and dry, and the sunlight is pretty falling through the shutters.

After I bought the Fuji 100X, I joined a Fuji group that was just about that camera.  There was lots of advice and information about accessories, and people posted pictures they had taken with that camera.  I posted, too.  I got a lot of likes.  Social media--right?  And I gave likes back.  When I posted these two pictures, however, some fellow from Berkeley thought it was awful that I would take a picture of someone who obviously didn't want his picture taken.  I resigned from the group right away.  I wanted to explain some things to that fellow, but I knew that would be futile.  He was just a helpful chap.  He was just trying to help me understand the system of morals under which I should labor.

Of course, I should know better.

In truth, the poet for hire didn't mind having his picture taken.  But really. . . if you set up a table in the middle of a road in New Orleans. . . . 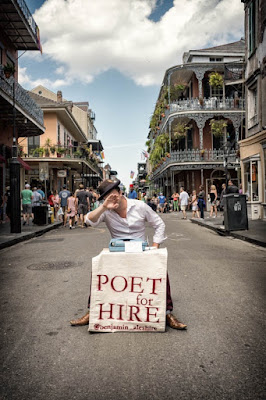