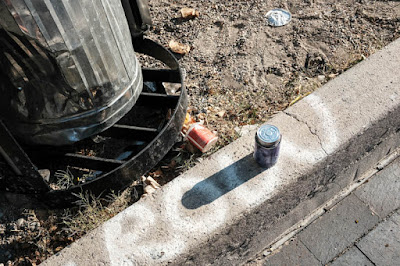 Albuquerque is a dive.  Even the people who live there say so.  It is also the weirdest city I have ever been in.  Period.  We drove around for hours one day looking for a liquor store that sold good scotch. O.K.  That makes me sound like an alcoholic.  That wasn't all we were doing.  We were touring the town, but all along the way, we looked for someplace to buy a bottle of scotch since we paid $60 for two doubles at the hotel bar the night before.  When we met people and they asked us what we had been doing in Albuquerque, I'd say, "looking for liquor stores, mostly."  And without variation, the response was always, "Didn't you go to Jubilation?"  No shit.  There seems to be one good liquor store in Albuquerque, and it is in the tony section of Nob Hill.

But it is truly a city of homeless bums and drug addled youth.  Everyone mentions "Breaking Bad" and for good reason.  The hotel in which we stayed was a mental hospital for children and youths from the 1980s through 2010.  It is obvious that it has closed now.

I'm not saying we didn't have a memorable time in Albuquerque.  We did.  We stayed in a wonderful hotel and ate at wonderful restaurants.  All it takes is a lot of money.

Yesterday, though, we drove to Santa Fe.  It is a different world up here.  However. . . we are staying in the cheapest place imaginable.  On the way up, we saw an ad for it.  It was on one of those highway signs that tells you what is at the next exit.  There were four things listed--a gas station, a Wendy's, a Cracker Barrel, and our hotel.  Not a hotel, exactly.  A "suite."  You will not believe me, but we are spending $55/night.  We have a bed, a couch and coffee table, a chest of drawers, a small kitchen and a bar table for two and a view of a vast parking lot that leads to a shopping center with an Albertsons which serves most of our needs.  And this year, the place has good WiFi.  Last night, we were able to stream "The Royal Tenenbaums" on my laptop.  I brought a bluetooth speaker so we had a real movie experience.  There is a laundromat here, too.  Did I mention $55/night.  We are living a Sam Shepard dream.

Today I begin my workshop with Jon Cone.  I'll become a master digital printer with special black and white inks.  My prints will be unparalleled.

Ili and I were both ill yesterday with some body ache thing and couldn't do much.  We got in the car and toured the area around Santa Fe so she could see where she was.  I turned down side roads and tried to get a little lost.  We ended up on Indian land and saw fantastic small cathedral-like churches and signs declaring Tribal Law and lists of things we were not to do.

And we saw a lot of mystical healing places.  There are many, many paths to physical and spiritual health up here.  We may explore a few.

But yesterday we took care of ourselves with Umka and Sambucus and aspirin and brewery beer (gluten removed) and an organic buffalo burger on a gluten free bun.  Back at the Suite, it was Trader Joe's chicken soup with added sautéed garlic from our own kitchen.  This morning, I am happy to report, we feel fine.

The windows and door are open to the beautiful Santa Fe morning.  Now I must shower and ready for the workshop.  There is always something to do.
Posted by cafe selavy at 11:11 AM