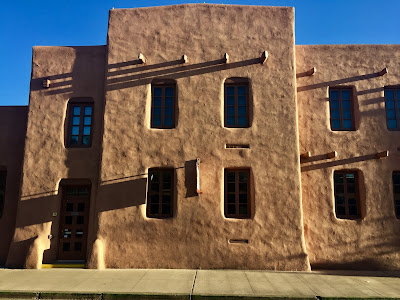 This is a phone pic.  I haven't taken any real photos while in Santa Fe.  Not really.  Both Ili and I have some slow motion sickness that drags us down.  We felt poopy when we got up Sunday.  Dragging Monday.  Sneezing Tuesday morning.  I went to the workshop yesterday (which was a disaster--tell you later) and am preparing for today's.  We love our little Santa Fe Suite room though, which is good because we have been spending a lot of time here.

Last night we went to dinner at the popular restaurant, The Shed.  Wonderful Mexican food.  And margaritas.  We split dinner as we have been doing since we got to N.M.  Then we went for a drive.  We just felt too tired and weak to walk around, a thing we usually love.

Then back to the room to watch "Master of None" on the computer while drinking an evening scotch.  We were asleep early.

I am in the workshop with a bunch of university art profs, three photography and one architecture.  They are from good schools like Pratt.  I have not even prepared for the workshop.  As usual.  They have culled their images and have them ready to print.   There are a couple of commercial photographers and a printmaker, too.  I don't care, though.  I like my stuff most.

Maybe it is because I don't feel well (this disease, whatever it is, makes us both fairly depressed), but I keep thinking that I don't care if I ever take a picture again.  It is a lot of work--for what?  I spend too much money and time for things that end up in a drawer, if that.  There is so much photography in the world that it doesn't seem to matter any more.

I told the fellow who has the workshop that I had to give up my studio.  He said that was too bad, that I was doing some really fine work.  I told him I haven't taken a serious photo since.  The gravity of that hit me.  It isn't just the photography but a general lack of focus and effort.

I go today to be with the artists.  Maybe I'll be inspired.  Maybe not.  That is the way it is with "maybes."  Perhaps the illness will run its course and I will become ecstatic with a renewed energy.  Perhaps the light, the incredible and original light, will inspire me.  Or maybe it will just be too overwhelming and just too much.

That is the only story I have to tell you today.  Fingers crossed for the future. 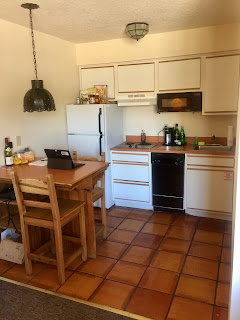 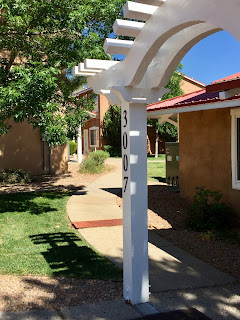 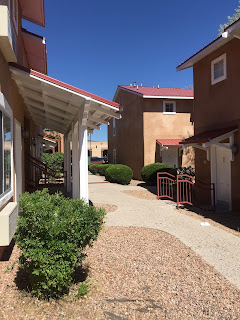