Try Not to Regret 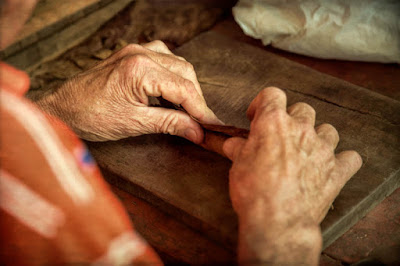 Going through old work is frustrating.  Sometimes I realize I am not as good as I think I am.  Other times, I realize that I used to be so much better.  Not just the photographs, but the writing, too.  I am overwhelmed by how much of each there is.  I can't really get through it all.  It gets frustrating.  It is odd, also, to see who you were and the direction my life has taken.  Like everyone, I want to go back and make corrections, but there is no going back, only taking the brutal road ahead.

Which parts of my life would I change?  Oh. . . those things are always best kept to oneself, of course.  But I'll confess that I a lack of self esteem has kept me from developing some talents fully.  Others have been retarded by the influence of significant people.

The old cigar roller--he might be happy with his skills of the trade.

Roller of big cigars?  There are two meanings to that, and two pictures to illustrate. 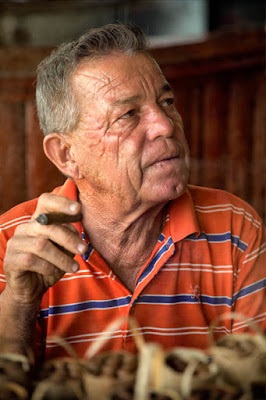 Call the roller of big cigars,
The muscular one, and bid him whip
In kitchen cups concupiscent curds.
Let the wenches dawdle in such dress
As they are used to wear, and let the boys
Bring flowers in last month's newspapers.
Let be be finale of seem.
The only emperor is the emperor of ice-cream.

"The Emperor of Ice Cream," Wallace Stevens
Posted by cafe selavy at 7:55 AM