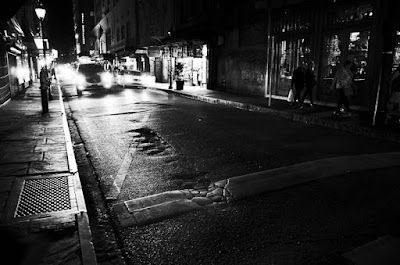 Doesn't matter.  I haven't been sleeping well.  It was worse last night.  My dreams were about my anxieties.  What will happen to me in the future?

It just couldn't be dumber. . . the worry, I mean.  We all know what will happen in the future.  It will be bad.

So I used some old practices and focussed my mind on one thing.  I think it was an imaginary red dot, but I can't be sure.  I fell asleep.

The human mind needs discipline.  I worry about others, of course, with their untrained brains.  They are vicious fools with all the rights and privileges given to others.

Last night's mind was like today's picture.  This image has no inherent interest, really, but the stark black and white tonality, the reflective light, the nothingness of it, they all seem to add up to something.  Tone, mood, atmosphere.

It doesn't take much talent, really, just the right camera.

Where are all the lovely ideas and images, though, the girls of April?  When they leave you, you know your days are numbered.  Perhaps not all your days, simply your good and fruitful ones.

But maybe climate change will fix all that.

I wonder what the fellow across the street's nights are like, the one whose wife just left him?  Maybe I should make a print of this picture and put it in his mailbox.  I would, but he has security cameras all around his house that are linked to his phone.  I could just show it to him and ask him if he recognizes it.  Art therapy, I'd say.  One of the form's more useful applications.  Don't worry about it, I'd say.  It's just a picture.  You'll be fine.

It's what people say to one another.  You'll be fine.