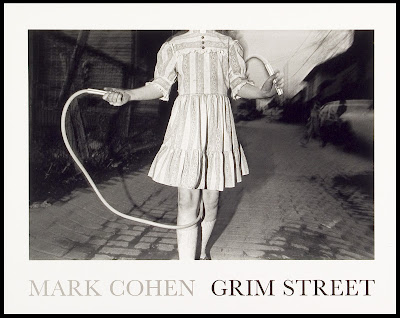 "I never really want to intrude anywhere but to put the camera in place is the problem. I see a lot of pictures when I don't have a camera with me and am relieved not to have to try to get there."
This is the first image I remember seeing by Mark Cohen.  It was the one that enamored me of his work when I was in school.  I copied that style for awhile, using a flash at dusk so that the background was always darker than the subject, the light falling away into the distance.  I did that just before I quit photographing the first time after I had moved back to my own hometown where photographers were considered with great suspicion.  Photography was easy in a college town.  When it became too difficult, I guess I quit.  I never went back to that style.

There is sometimes a dream and sometimes a nightmarish quality to his photographs.  They are usually quite jarring and disturbing.  It is difficult to think of him stalking the streets and making these sort of images for over fifty years.  If you've ever tried it, you'll know.  It is exhausting.

But it can be exhilarating, too, and, as they say, "The devil drives."  Why do it?  That is the question that you always hear.  It is always with you trying to make you doubt.  Cohen's success is in part due to his ability to go on. From an interview in 2015:

Anne Wilkes Tucker: When you say, “I’m making pictures to put in the drawer,” there is a kind of determination on your part to continue with what is in your particular eye when I’m sure there were dealers saying to you, “If you’d back off a little, it’d be easier to sell them.” Were there not?

Mark Cohen: Well, no. They didn’t make any effort to sell them because they weren’t expensive enough. They were only six hundred dollars, so it didn’t matter to the dealers, or to the Marlborough Gallery or to Virginia Zabriskie either. The galleries thought that my pictures were strong. I got good reviews, but they never sold many. But that was okay. It’s still hard to sell them.

He speaks about the inherent sensuality of the photographs, the closeness and revelation of skin.  It doesn't take much, but much is suggested. 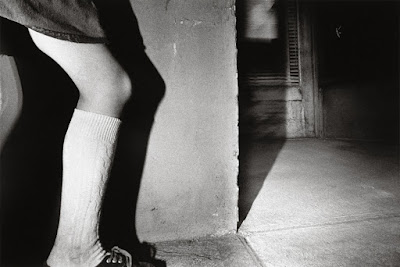 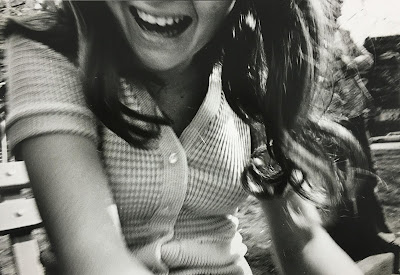 I don't know much about his life.  I wonder if it was what one would deem "normal."  What were his personal relationships like?  Were they sustained/sustainable?  I know from experience that it is hard to find someone who wants to put up with such an obsession.  Obviously, there is something disturbing revealed, the photographer, as it is, always photographing the inside of his or her head. 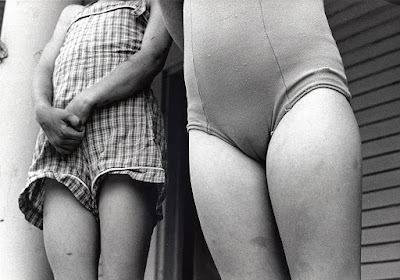 C.C. wrote me yesterday about the "rapeyness" of art.  All of it is, he says.  For the photographer, I guess, to reveal the things people refuse to see but can't stop looking once they are, there must be some sort of perverse madness.
Posted by cafe selavy at 7:55 AM