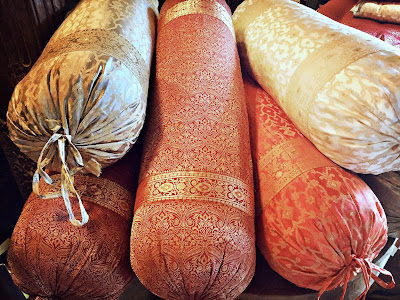 I'm buying furniture today from a shop that imports exotic things.  Does the word "exotic" have any meaning now?  I miss the exotic world of the "other" just like Trump's crew.  Remember harems?  Oh those crazy Arabs.  What happened to them?  Who didn't love the Ali Baba pants, the curved swords and the crazy headgear?  And those curly-toed shoes!

I've always used my magic carpet to take me on adventures.

But the old world was just an illusion, as are most things we enjoy.  Like Sam Shepard.  I lost that this week, lost the old Sam Shepard world.  A friend from the factory told me to watch the documentary "Shepard and Dark."  Thanks a lot, old gal.  Shepard turns out to be a real shit.  To have been, I mean.  That fellow, Dark, though, is not.  Dark, I mean.  It is Shepard who is dark and manipulative.  I won't spill just in case you are interested in watching the film.  You can rent it on Amazon and iTunes.  And if you aren't interested, you don't give a poop anyway.

Anyone who is not part of the contemporary world looks bad, I guess.  Shepard was stuck in time, part of the macho male American mythos where and when bad behavior was mitigated by good intentions and running away was always the cure.

All I have to do is watch one of the old films I liked growing up, something with Gene Hackman in it, for example (maybe "Night Moves"), and I realize how much society has changed.

"Go talk to your old lady."

There was a recognition of manly violence and innate brutality.  To be a hero, all you had to do was reign it in.  Most of the time.

But Goddamit, a man had to be a man.  You wouldn't want your old man not to be a man, now, would ya?

Still, this sissified world we (Americans, mostly) live in is going to get us into trouble.  People speak and act as if violence isn't a real thing any more.  We've outlawed it and it is gone.  We all have rights.

But the world is full of brutal violence, and it is going to be interesting to see how we meet it.  Irony and sarcasm and high-toned verbiage might not be the best defense.

We'll see what the new John Wayne looks like.

Still, I'll pass on paying $100 to watch the Mayweather/McGregor fight, if for no other reason than I don't want to stay up that late.  I'm sure the fight won't start until midnight.  Here, I mean.  F' you west coast.

And besides, I'm going to be broke after purchasing my exotic furniture today.  Hand carved, primitive and rustic.  And did I mention. . . exotic.
Posted by cafe selavy at 8:47 AM