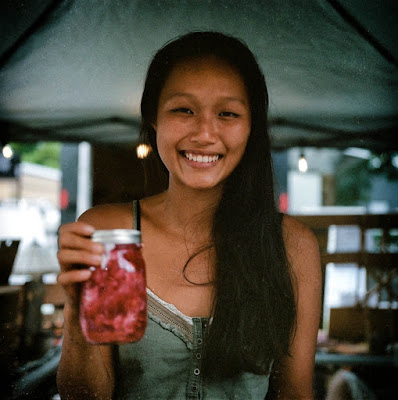 "I bought Ili a book called "Literary Cocktails."  It is a cute book that has gone into the library."

I show a phone pic of the library, my new antique Indian liquor cabinet, all around.

"There is a recipe for margaritas that is tremendous--just fresh squeezed limes, Patron, a little Countreau, and a splash of simple syrup shaken like a martini.  They are delicious.  So last night we had a couple and decided to head up to the little hipster market on the Vespa to get some artisanal bread made with dirty little hipster hands."

"They're not wearing helmets," says one of the doomsayers.

I give the big-eyed head shake and continue.  "Anyway, on the way their, we pass the little hipster coffee/cocktail place and its Monday and they are having the market they always have on Monday's in their parking lot, so we pull in.  At one of the stands, there are pretty, colorful jars lining the table, so we stop to see what they are.  One of the kids at the table smiles and comes up to see if we want anything.  'Kimichi," she says.  'I ferment it for five days,' and she offers us a sample.  It doesn't smell like the kimchi I'm used to in the sushi shops.  It is much milder."

"They ferment that stuff for thirty days," says one of the gourmands of the group.

"Yea, this was mild.  And Ili, being a dirty little hipster, is all about it and she and the girl are flirting back and forth and we end up buying some.  I'm looking at the jar, though, and its got like a piece of paper and a rubber band holding the top, and I'm wondering who is inspecting this stuff.  It's surely being made in some dirty commune kitchen or something."

"You lived a charmed life, don't you," said my old college roommate's wife.

I told the girl I would buy the jar if I could take her picture with my new film camera, and she said sure.  She gave us a card and wrote her name and number on it and told us about the commune they all live in.  Ili looked it up, and there is a lot of stuff about it online.  Life abounds.

We have her phone number, so I guess we can text her the photo, but it is nothing.  I wish I'd get better at this.
Posted by cafe selavy at 9:05 AM