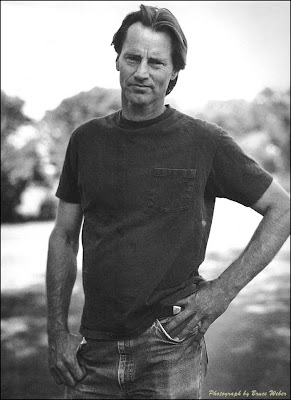 For years, I've used Sam Shepard as a tone, a mood, an atmosphere.  Things looked or felt like a Sam Shepard play, I'd say, though I never meant one in particular.  I'd see a photograph of something in the west, an old gas station and a long stretch of highway, and THAT would be Sam Shepard.

He had “a quality that is so rare now — you don’t see it in the streets much, let alone in the movies — a kind of bygone quality of the Forties, when guys could wear leather jackets and be laconic and still say a lot without verbally saying anything,” Philip Kaufman, director of “The Right Stuff,” told Rolling Stone.

Part of a eulogy that focused on “. . . the unease about masculinity in American culture.”

I sent this from a David Brooks article to friends after one of them told me to read it.

The Greeks admired what you might call spiritedness. The spirited man defies death in battle, performs deeds of honor and is respected by those whose esteem is worth having.

The magnanimous man has a certain style. He is a bit aloof, marked more by gravitas than familiarity. He shows perfect self-control because he has mastered his passions. He does not show his vulnerability. His relationships are not reciprocal. He is eager to grant favors but is ashamed of receiving them. His personal life can wither because he has devoted himself to disinterested public service.

I caught lots of grief for quoting Brooks, but I liked the description (even though C.C. tells me he is butchering "Poetics and Ethics").

I liked the idea of Sam Shepard.  The world feels different now.  There is little of the living left in my personal iconography.  Peter Beard.  Can't think of another.

We are products of our time.  You never understand that until it is too late.  Maybe that isn't true.  Hemingway wrote "In Our Time" when he was a young man.  Maybe he just got lucky.

Farewell Sam Shepard.  You were a product of your time.
Posted by cafe selavy at 9:46 AM