Distractions from the Void 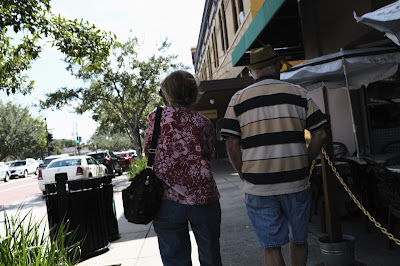 Grit City.  I am staying up here for the Labor Day weekend.  It is a funny, decrepit old town that once was a southern belle.  Situated on a lake that is really just part of a long river running to the sea, it used to be the economic hub of the state.  The streets are lined with fantastic old houses and million year old oaks.  There are impressive parks and more churches than I can count.  But when the highways were built, there was a political war that situated the crossroads in my own hometown.  Riverboats that used to haul lumber, citrus, and other produce had to compete with the rail lines.  Eventually, the money ran away, and the old southerners who were the fine, high rulers of this little corner of the world passed on less to their heirs than perhaps they might have.  And those heirs held on like pit bulls to the status that had marked their upbringing.  They became politicians and fought for state funds, but more than that, they ruled the city and the county and they allowed one another to do what they needed to make money in order to stay in power.  And that never works.

"I say, now, old Johnson comes from a good family.  He wants to build that little subdivision out on that old orange grove, and we've got plenty of orange groves and old Johnson would never do anything that wasn't on the up and up."

And, of course, there were the waste dumps and the cheap, ugly gas stations and mini-marts, and things got worse.

Now, though, there is a sort of renaissance taking place that may or may not have a positive effect.  Main Street still has a charm, and the old clothes by the pound and junk furniture stores are being replaced by specialty shops and restaurants.  There is a hipster crowd who all want to open craft beer bars and breweries, and now it is possible to get a good cup of coffee in several places.  But the waterfront is beat, and there are government buildings that will never look right.

Ili and I took a long, slow bike ride yesterday, me with my cameras as if I might actually photograph something.  It was hot and damp and no one was about.  We rode through the pretty part of town, then to the fallen part, then to the outskirts where cheap housing was built in the '60s and '70s, little bunny hutch homes pitched close together, where people keep boats and tractors or just tires and junk, where yards are sandy and unkempt and people with hangovers or worse sit shirtless on cheap, broken furniture.  Then we rolled down to the waterfront, peddling by the fishermen, mostly black, sitting on upturned buckets or cheap lawn chairs, staring into the still, oily surface occasionally disturbed by water bugs or methane bubbles coming from the mucky lake bottom.  We saw a fellow who caught a catfish and had left it lying on the bank.  We saw then smelled a headless turtle lying in the weeds.  Further down, past the fishermen, there was only heat and humidity and the metallic light and the big emptiness that was both out there and within.

This was the world I grew up in, I thought, the one that made me want to make something--music or pictures or stories.  There was a need to fight against the void.  There were those who could and those who simply sunk despondently into its morass.

I imagined Faulkner living in Mississippi, the nothingness all about, desperate to write something, anesthetizing himself with bourbon, the heat, the humidity, the void. . . .

I am unable to continue.  As always, I must pay attention to something else or I will pay the consequence.  There is the void against which to write, of course, then there are the distractions which is what most people use to counter the void.  I am called away by the distractions once again. 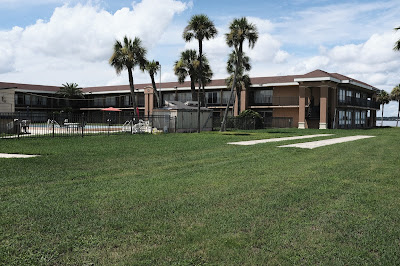