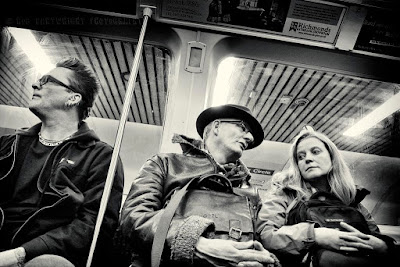 I started doing a little research into street photography last night trying to develop a timeline and sequence of images.  You can't do much with Google.  You can get the Wiki stuff, but I didn't find anything by true critics or academics.  I will need a university data base, I guess, to see what is out there.  All in all, though, I don't think that there is really much out there.

It is interesting, though, that the earliest "street" photographers came from upscale artistic or otherwise bohemian families.  Paul Strand and Walker Evans were two of the early ones, both from NY, each rather privileged, though Evans was broke for most of his life.  I found an interesting passage about his trip to Cuba to do a story on the corruption of the Machado era.  While there, he became friends with Ernest Hemingway who lent him money to stay another week beyond the end of his assignment.  He left 46 prints with Hemingway when he left the island.  They were only discovered in 2002.  I would like to see those prints of street life in Havana back in 1933.

One of the common threads that connects the lives of street photographers was an obsession with documenting common life and the eschewing of commercial work.  From Paul Strand and Walker Evans through Robert Frank who quit his lucrative magazine career, street photographers were strident about their works and visions even though there was little economic reward.

I think of Vivian Maier.

To wit: I can't even give away my work.  My friend who has two of my photos hanging in his office--I assume somewhere near the Russel Chatham print--took me up on my offer and said he'd pay me $50 for a picture.  Of course, I told him I couldn't accept the money and that he could have any image he wanted, to which he replied that he didn't really have any more wall space for another print.

Of course this wasn't the street photography images, but still. . . I feel in heady company.

There was an article about surviving the coming apocalypse in the N.Y. Times today.  Silver and gold in small amounts.  Silver dimes, they say, will make good barter.  Alcohol.  Weapons.  It is a Mad Max vision of dystopia.  I hadn't known that baby powder on your sheets might protect you from radiation.  Turmeric and black pepper.  I need to get ready.  Street photography will indeed be something.