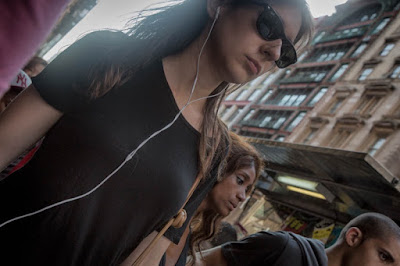 These are dangerous times.  People are angry.  Maybe this will come to be known as "The Time of Anger."  Don't doubt it.  Every time I put up something like that here, it makes its way into the popular lexicon.  Doubt it?  Find an earlier published use of the term "Weinstein Effect."  You can't.  I could list others.

O.K.  I'm sounding like Trump.  I should delete that, but I can't.  My point, however, is that there is sure to be more violence.  Have you ever been angry?  I have.  And when I try to argue from anger, it doesn't go very well.  It is stupid.  So when anger and outrage and vehemence are the tools of the trade, stupid things will happen.

I am from the anti-violence movement.  There needs to be an anti-anger movement as well.  But I get it.  The only way to get some people to listen sometimes is to go all crazy on them.  Maybe violence helps peace.  I wonder about the efficacy of the different social movements desiring the same results.  Martin Luther King and the Black Panther Party, for instance.  Hippies and the SDS.

In anger, many things get conflated.  I started to make a list, but I won't.  It is too long and gruesome. But for those who can't or won't, for those who are frustrated and threatened, fist will fly.  What else can one do?  The only humor you are allowed to use now is making fun of Trump and his supporters. The rest is all off limits.

Somewhere, though, someone is secretly writing a great novel.

I, for one, have taken to solitude.  I'm only slightly ahead of the curve on this one.  It is the way of the future.  I go to the Cafe Strange and have my beer and write.  It's true.  I'm more than slightly ashamed of it, but I have intimate things to say and no one to tell them too, so I write.  A glass of beer in the late afternoon or early evening with a pen and a notebook in a strange cafe.  All about, people look at computer screens with headphones in place, a form of publicly shared solitude, or so it would seem.  Suspicion and paranoia hang in the air, and attitude, really, a defensive arrogance.  Here and there, a group of young people will talk and laugh as is their wont, but it is high toned and haughty, too, a hangover from a not too distant adolescence, perhaps, or maybe something more.

The cafe has ancient artifacts--a manual typewriter that people actually use, and a Photo Booth that I sometimes take advantage of.  It is dim and weird inside with strands of hanging lights and bookshelves and a million framed pictures.  It is a coffeehouse, but they have a full bar and another half bar that only serves expensive scotches at a very reasonable price.  They have a kitchen and serve breakfast and lunch and a kind of dinner.  The people who work there have a look.  I have come to enjoy it much more than I do the chi-chi places I used to like to drink.  It is high brow vs. low brow hipster.  It is easier for me, right now, to be alone at the Cafe Strange.

And I'd rather be alone than in the mix.  Nothing I have to say will please anyone.  I am used to that, but as I say, these are dangerous times, and I am looking for peace.

I will take some pictures today.  Factory work keeps me from all of that during the week.  I have been so exhausted after work, and with the time change, all I want to do is make dinner, have a drink, watch a little something, and go to bed.  But that is nothing new.  It is my season's torpor.  And right now, torpor seems a luxury.
Posted by cafe selavy at 9:15 AM