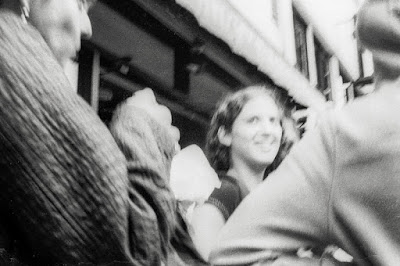 I watched the second part of the Rolling Stone documentary last night.  I couldn't get into it, though I watched it through to the end.  It was a testimony to how success causes bloat.  It made me almost thankful that I have never had any success.  Not quite, of course, but almost.  Besides, I've become bloated anyway, not with success, perhaps, but with something.  It is a lifelong struggle trying not to bloat.

But really, if you have ever read anything at all, you know that.  It is one of the go-tos in literature.  The bloated king, arrogant and full of himself.  And what happens?  See, you should have been reading more carefully.

I've read the literature of losers, people for whom love and success won't stick.  You have to be against everything.  Only the discarded have an edge.  We know that.

Still, there is the bloat.

I don't want to call anyone out.  There is enough of that.  But make a list of the bloated.  It is a surprising list.  There is more than enough bloat to go around.

And we know that one of the sure ways to lose is to get bloated.

I have been as full of myself as many at times, too many, perhaps.  But there was no success, so the fall wasn't all that far and the "thump" hurt but did not kill.  Only a few who were close by even heard it.  I was no king but an antihero, and maybe the bloat of the antihero is even uglier than the bloating of someone of more authority.  There was that Clinton bloat, but which one?

But I said I wouldn't call people out.  Still, which was worse, the Trump victory or the Hillary defeat?  Are they really opposite sides of the same coin?

You will have your opinion and someone else will have another.  Whatever, it has a great affect on us all.  I feel it.  You feel it.

But in the night, I have to live on a personal level, as do we all.  I have taken down many of the mirrors, but sometimes I just have to look.