Little Eddie and Me 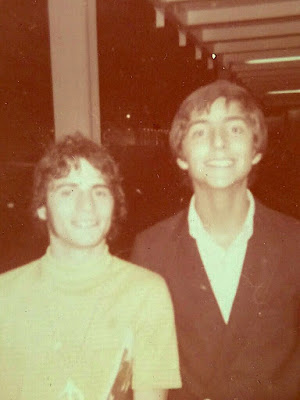 Bizarre.  Last night as I was entering the grocery store, I heard a voice yelling at me.  I turned around to see a guy I barely recognized.  He was the brother of a fellow I used to play with in bands when I was a kid.  He seemed like he might have been drunk.

"I've been trying to text you," he said, which would be really weird since I have never had any reason to give him my telephone number.  I've only seen him a couple times in a decade or so.

"I thought you might want this."  He pulled out his phone to show me a picture.  It was of me and Little Eddie Brigati late one night after a Young Rascals concert.  Weird story, but here is the evidence.

Little Edie was apparently little, I think, since I am only fourteen in this picture.

As I say, this was a weird night.  My bandmates and I had snuck backstage at the concert.  We did this often.  We were really good at it.  We always wore our band clothes.  I guess we thought people would mistake us for the opening act or something.  But we would just mill about with the others and listen to the music from the wings of the stage.  We never had tickets.  I don't know.  I guess we were just cool.  When I think about it now, I find it really odd.

When the Rascals had finished playing, they came backstage and chatted with people.  We introduced ourselves and we got invited to their hotel for the afterparty.  We weren't old enough to drive, but we knew where the hotel was just a couple miles away, and so we walked.

When we got there, we went into Felix Cavaliere's room where he sat on the bed with a couple of girls.  Others were sitting around on the floor.  Felix pulled out a joint and started passing it around.  I'm not sure any more, but I think that was the first time I'd been around it.  We milled about and talked to the drummer, Dino Danelli, for a minute, but he asked a girl to come to his room and he closed the door.  That was the last we saw of him.  Little Eddie, however, came out of his room with an acoustic guitar.  Somehow Wayne, the guitar player in our band ended up playing it and we were all singing with Little Eddie.  Wayne had a camera with him, one of those little instamatic things that fit in his pocket, and we all posed for pictures standing under the fluorescent lights outside in the breezeway.  Wayne had brought a recording of our band and gave it to Little Eddie.  And then the party was over.

If I remember right, Wayne had stolen some of his mother's diet pills, benzedrine, and we all took them.  We decided to stay out all night walking around.

This isn't the only band we partied with in my early teens.  We also partied with The Hollies.  There are many tales to tell like that, and it is a wonder to me that we were able to do this, just little crackers kids in a sleepy southern hamlet.  I don't have pictures of it all, though.

I lost track of Wayne in my twenties.  I went to college and he played in bands.  He wrote a song that Dione Warwick recorded and he played as a studio musician for awhile.  I asked his brother standing there last night what Wayne was doing now.

Apparently, he had a heart attack.

I have a copy of this photograph somewhere, I think, but I had thrown darts into my face long ago.  I didn't like the way I looked in the picture.  I still don't.  I was a much better looking fellow than that goofball making the ridiculous face.  Maybe we had already taken the benzedrine.  I don't know.

Things were different then.  We were little rockstars playing at parties and on local t.v. shows.  We were famous--almost.  I was the only one of us who stayed in school.  The others and almost everyone I was friends with dropped out when they turned sixteen.   That didn't work out so well for most of them.  Looking at that faded photograph brings back some things I don't think about.  I was trying to get away as best I could.  I guess I got lucky.