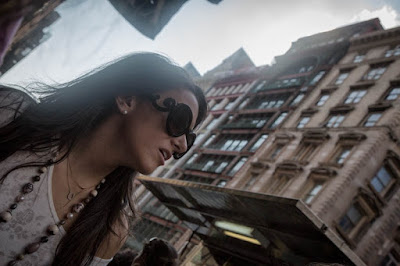 I did put in for leave on Monday and Tuesday so that I could have nine uninterrupted days of leisure, or at least the chance to do what I want.  I thought about traveling--did I already write this?--but have had to admit to myself that I am not happy enough to make that worthwhile just now.  I will spend the next nine days trying to make myself happy.

I left work early yesterday so that I could get to the gym and home in time to ride my scooter somewhere for a drink.  I decided on the old high-end hipster place that makes delicious cocktails.

The place was full of business men and women.  The bartenders weren't the same ones.  I squeezed in between two fuckheads at the only seat left at the bar.  The bartender wanted to be cooler than I.  My drink was slow in coming, a house old fashioned.  It seemed he poured it short.  When I'm normal, I would have been ready to swing on someone.  I would have "leaned in" as they say, bumped shoulders, swung my elbows in wide arcs, looked at people hard in the eye.  But I'm not normal.  I felt small and unimportant.  I was half the size of anyone else in the room.  I could barely move.  I finished my drink in a couple gulps and got the hell out of there.

I felt stupid climbing on my Vespa.

I started thinking about the rest of the evening.  I was hungry.  Cook or eat out?  I came to the realization that I wanted a steak, so I stopped at the corner butcher's and got one already marinated.  Asparagus and some small red potatoes.

It was an easy prep and everything went on the grill.  I opened a bottle of wine which tasted fine.  Everything cooked, I sat down with my computer to watch "Mr. Robot."  I tried to watch it a couple years ago, but it was on commercial t.v. and I couldn't stand it.  I have Amazon Prime, so I can watch the series uninterrupted, but Amazon doesn't work with an Apple T.V.  That is why I sat my laptop up on a t.v. tray in front of the one holding my dinner and started the show.  It might or might not have been a good choice right now.  It is about a fellow who has social anxieties, who is struggling with his isolation.  He can't connect, so it seems, and is bothered by the one percenters who control everything.  He makes up an imaginary person to whom he tells his story.

I saw the whole first episode.  I slept through the entire second.  When I woke up, it was 9:30.  I turned everything off and went to bed.

I woke at six.

I don't have a doctor and my supply is about gone.  No, things have not started well.

This morning, I ordered a Fire Stick from Amazon.  Amazingly, it will be here today.  I will be able to watch the rest of the series on my T.V.

And so I begin my "vacation."  I began thinking of the places where I should travel this morning.  I want to go on some big trips.  Morocco.  Japan.  Kenya.  But, I realized, there are places to go around here by car that I can't get the energy for.  I will need to overcome this lethargy/torpor/catatonia right away.  I need not to be half the size of the other people in the room.

I talked to my mother last night about our Thanksgiving plans.  She does not feel well enough to go anywhere, she says, so it will be the two of us with a Costco chicken or something dreadful.  It will be the opposite of last year when we had fun.

I've got to figure things out better.  I am falling apart in the night.
Posted by cafe selavy at 8:36 AM