The Nature of Evil 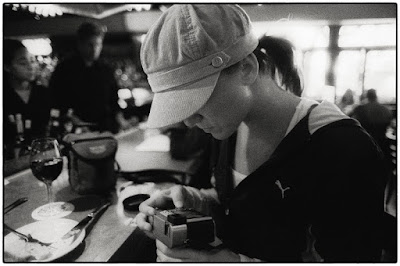 Just this side of the turn of the century--my second digital camera, the big Leica Digilux.  This was a friend in S.F. I took the picture with film, of course.  My old scans seem to be better than my new ones.

I had to go to work early yesterday, and I didn't get home until late.  Some days are just like that.  When I got home, I ate a quick dinner in front of the television.  It was too late for the good news shows, so I looked for something on one of my pay channels.  I saw the Rolling Stone documentary, pt. I, on HBO.  I finished up my meal and poured a really deep scotch.  I bought the ticket and took the ride.  And what a fun ride it is.  You try, too.

But there is something very unfortunate about this doc.  Harvey Weinstein.  They didn't see that coming when they made this one.  They would have needed to redo the first half hour or so of the show.  Watch it.  You'll see what I mean.  I'm sure HBO will get called out on this one.

But maybe Jann Wenner's sexual fluidity will save it.  My he was a pretty boy married to a very beautiful girl.  They looked so much better than the times.  And for the first time in a long, long while, I missed the early days.  There was an energy and a purpose.  And as usual, it was misdirected and mean and selfish, but it pretended not to be.  But when H.S. Thompson is one of the guiding lights, what can you expect.  He was a prescient genius, but he was twisted to the very core.

And that was my take away from watching part I.  Right now, the world is full of Captain Ahabs trying to rid the world of Moby Dick, that Great White Whale.  They are righteous and indignant and will save the world from evil.  But the world is never saved by Puritanical jihadists.  The best ideas come from very flawed people.  That is not to say that bad ideas don't.  But we can prosecute every signer of the declaration of independence for their dirty little acts and their twisted little souls.  I never trust the people who jump out and say, "Gotcha!"

I think Hitler was a Christian.  He hated the Bohemians and decided that they were evil and that they would have to pay for their crimes.  The masses rallied behind him and his message of purity.

Everyone I've ever liked is flawed, but they have some very lovely ideals.

Here's my challenge.  Write down your moral code, the one that guides your life, the one you live by.  My guess is that you will have a very, very difficult time.  You've not really done that, but rather, you've accepted some vague notions.  It's like asking someone to list the ten commandments.  Six is about the average for most Christians I know.  Then they start throwing in stuff like see no evil, hear none, speak none.  But that is just an example.  You don't have to have ten commandments.  This can simply be your code, the one you've worked on your entire life.

Once you have it fairly done (I doubt you will ever make one that is complete and with which you are satisfied), try to consciously try to live by it for two weeks.  Keep a journal of every time you break your own code.

In a few weeks, we'll all get together and share.  It will be interesting to see how different what we each came up with is different from the others.

What are we to learn from this?  Well, first, most of us have been judging others by a code so vague we can scarcely write it down.  Second, that our codes are not the same.  And third, we will question whether it is right to expect others to live up to a code they might not fully agree with that we ourselves have trouble not breaking.

We are all very flawed.  Sometime in the near future, I hope we all quit prosecuting one another and begin to work things out.  I'm tired of the anger and the outrage and the rest.  And I hope we all begin to realize that what we thought and did in the early parts of our lives does not seem so good when viewed through the present.

Still, man, oh, man, HBO is going to catch hell for this one.