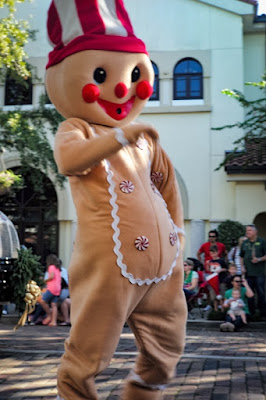 I got a lot of responses to yesterday's post, none of them negative.  What sort of people come to this blog?  We're just a collection of misfit toys, I guess.  Perhaps you love as much as I do the idea of people acting badly?  I like living in Middleville, but I love taking day trips to the Land of Misbehaving.

One must be careful these days, though.  Such talk can land you in the slammer.

After I wrote my piece yesterday morning, I set out on my little scooter for the Boulevard where the hometown Christmas Parade was about to take place.  Yes, we still have Christmas here.  And it is a white one.  Really, really white.

I first took pictures of the parade forty years ago.  Black and white film, funky pictures.  If you've been coming here for awhile, you've seen them before.  Back before the Great Invasion, when this was still a small community for the small population who lived here, I used to go down and see my friends in the morning.  There was Betsy, still in last night's clothes, wobbling on heels, looking like something out of yesterday's Vogue.  We would grab a table at a Boulevard Cafe and eat breakfast while we watched it all passed by, people stopping at the table to tell last night's tales.  This used to be a town chock-full of tales.  It was a better place to live that you could ever imagine.  Now, it is like a lot of other towns that have been Disneyfied.  It was Google Maps that did it.  The Boulevard used to be a difficult street to find, and once you found it, you were shunned for not belonging.  You didn't have fun.  But once the developers got in, the zoning laws changed and the population went up and they started coming here by buses and cruise ships.  Now the Boulevard has become a bit of a tree-lined, brick street, outdoor mall.

So yesterday, the Boulevard was packed.  Still, there is a heavy town influence, and the groups marching in the parade or riding in convertibles or on the few flatbeds are from here.  The Vespa was just the thing for driving in, though, and I parked a block from the parade.  Getting off the bike, however, my back seized up.  I mean it gripped.  I could hardly straighten up.  I had to walk slowly and had to grimace.  This adds an element to the story to come, I'm sure.

I mean, if you really want to get into trouble, be an old guy with a camera at a Christmas parade.  But no, it can't be true.  Everybody had cameras.  People were taking photographs all over the place.  But me. . . somehow, I drew a lot of looks, and they didn't look like they were full of pity for the poor guy in pain.  Worse, however, there were plenty of people in the crowd who recognize me.  I'm telling you, it is a mistake to photograph in your own hometown.  But the crowd was large, as I say, and I've been taking pictures at the parade for decades, and I wanted to continue.

I had taken my digital Leica M 262.  I don't shoot with it much, and I spent a lot of money on it, so I wanted to see what I could do with it.  It is a beautiful camera and makes lovely images, but yesterday cured me of dreaming of owning the Leica M10.  As wonderful as the cameras are, almost every other camera has better features.  Manual focussing sucks.  In a crowd where everything is moving, trying to capture focus takes too long.  And I know how to use depth of field on a rangefinder.  I was shooting at f11 and f16 but things still turn out not to be tack sharp.  Any camera with autofocus will beat me using a manual focus lens.  I like the camera, but not for how I'm shooting now.

Luckily, I had my little Fuji 100F with me.  It is great for quick crowd shots.  Point and shoot.  Bam!  And I found that I like my hip shot pics much more than when I put the camera to my eye.  There is something in those weird angles with images falling out of the frame in awkward ways that appeals to me much more now.  They have the elements of a peep show and have more of an offhanded "On the Road" feel than the others.  I've had much practice and can really anticipate a shot just by pointing the lens without looking through it.  At least that is how I feel now. 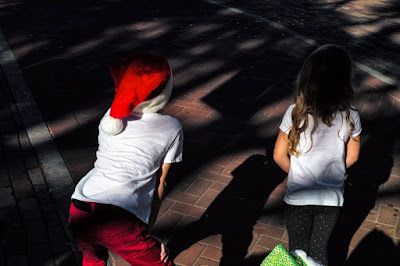 Today's pictures, though, are both taken with the Leica at my eye.  I haven't messed with the images much, just simple light and contrast adjustments.  Leica really does have a "look" even in its digital images.  I am not saying I could pick them out in a blind test, but their processors work differently, the colors have a different saturation and hue.  All cameras do, Canon, Nikon, Fuji, or Sony.  The images just come out of the camera with different qualities.  If I end up spending money on another Leica, it will not be an M.  It will be one of the new automated ones with autofocus.  I am giving in.

At one point yesterday, I noticed my $200 sunglasses had fallen out of my pocket.  My heart fell.  I walked up and back the quarter mile I'd been since I last knew I had them, looking over the ground I had walked thinking, "No fucking way.  Someone found them and picked them up and now has a beautiful new pair of expensive glass."  I walked up and then back.  And when I came to the last place I'd been, I decided to give up and accept my fate.  And just then, as I turned around in despair, there they were.  Someone had set them up on a little wall to put them out of harm's way.  I couldn't believe it.  I wondered about the person who did that.  Did they see them fall out of my pocket?  This is a wealthy little community.  Was this the way the people who weren't economically desperate behaved?

I turned my attention back to making pictures.  I was looking for places where the rising sun made deeply contrasted shadows.  It was difficult to find a spot.  After a bit, I found a piece of curb I could sit on.  I would just take photos of the parade from there for awhile.  My back was getting worse.  And so I put the little Leica to my eye and half-heartedly tried to find something, anything, of interest.

And that is when I saw a group of little girls in orange tutus marching with their mothers.  They were the kids I had been photographing at the place I found my sunglasses. And there, leading the group, was my ex-wife.  No shit!  She lives here, but I NEVER run into her.  I haven't seen her in several years.  Then I wondered--was it she who saw me drop my glasses?  Jesus, the odds were very, very high.  My skin began to crawl thinking about it.  I KNEW not to try to photograph here.  I turned the Leica on her as she paraded by.  Did she know I was there?  It seemed to me she did in the way she never looked where I sat.

After they passed, I sat on the curb a bit, wondering.  This had been a weird, bad morning, I thought, even if I did get my glasses back.  My back was really getting stiff, so I got up and took little baby steps back toward my Vespa.  I was certain the pictures I got were not worth the trouble I'd gone through to get them.  What was I looking for?  What was I after.  Some vague, personal essay on the meaning of Christmas?  A bad commentary on lily whites?

At that point, none of it made any sense to me.  And what followed was a day of misery and confusion.  My body and my mind felt crippled.  I couldn't move for physical reasons, but my psyche wasn't far behind.

There are other events I wished to document, but I didn't do even a decent job yesterday, and I don't think I have the heart for it now.  I was going to go to the Big City Parade that started at sundown, but I didn't have it in me, and I decided to make some dinner, smoke a cheroot, have some drinks, and go to an early bed.  After a night of Advil P.M. gel cap sleep (they work REALLY well), I have woken with a bad back and a hangover.  My mother comes for dinner tonight.  Something is wrong with me.  I need to figure this shit out.
Posted by cafe selavy at 9:11 AM