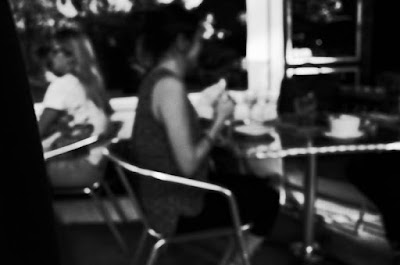 Christmas has come and gone.  It is all a hollow, blurry mess.  And now the post-Christmas trauma.  Everything was off.  It seems to have come on the wrong day this year.  I tried and went through the motion, but there was too much to unpack this year.  I am fairly traumatized by it all.

I must say, however, that I impressed myself on Christmas Eve and bought my girl a mink stole.  I'm not shitting you.  We were in that very same Vintage shop and I saw a stole that was beautiful.  I didn't imagine it to be real.  When she slipped it on, I asked if she wanted it.  She did.  The owner came up and said something, I can't remember what, but I replied that I didn't think it would fit him.  He took offense and said he wore that for years in his drag show.  He took us through its history, made in the fifties with small pockets inside the arms, a very unusual thing, apparently, for women to keep their lipstick and makeup cases in, but he said he used to keep glitter there and throw it during his show.  Now, he said, it is perfect for keeping a cell phone.  I asked what it was made of, and he told us it was real mink.

Tell me, now, if I have not made a step up in the romantic hero column?  I felt very proud of myself.  The gift was more for my bragging rights than anything else.

We hopped on the scooter and scurried on home.

Later, drinks with the venerable fellows on the Boulevard for the traditional Christmas Eve meet up.  Divorcees and bachelors, scions of high times and hazy old times.

And then the beginning of Pajama Party at the house with mother.

I'll leave the narrative there.

Now, post-Christmas, I decide to start No-Drink-January a week early.  I may need the Betty Ford Clinic for this one.

I've not given you much of the holiday season in these posts this year, no music or festive images, barely even a card.  We've had plenty of Christmases here, though, some good ones, too.  Now, the search for better stuff and grander times.  Or at least the end of certain miseries.  The weather is pleasant.  I will take a walk.  Maybe something will come to me.
Posted by cafe selavy at 8:42 AM