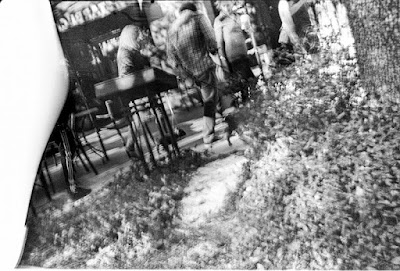 This picture is a mistake, a fragment, a confused moment.  It could be said to mirror a feeling of nothingness, an empty life.  It would be a strained and amateurish comparison, but it could be said.

Something missing, something disappearing.  Something insipid.

The morning is foggy, damp and cool, a southern winter's day of indeterminate length.

I haven't paid Henry the yardman for two months.  I just don't see him.  He has been coming when I am not here.  I thought I would catch him before Christmas, but he snuck in while I was out.  I feel terrible.  I wanted to give him money.  I can't mail him payments.  I don't know his address.  I don't have a phone number.  He has been taking care of my yard since 1988, I think, and I have never known any information about him other than his name.  It is terrible, but how could I ask him now?  No, we will continue on in this mysterious way until he just doesn't show up again, and I will wonder what happened to him.

My buddy gave me a picture of Brando sitting with a wild gorilla in Idi Amin's Ugandan jungle.  It is big and framed and so I can't scan it and all pictures show a reflection in the glass.  I tried to find one on the internet, but this is the best I could do.

It is supposed to be a joke gift as he and I were both swindled by our good buddy who used our money for other purposes.  That was a long while ago, and now Brando is dead.  I've decided to hold onto the picture rather than throwing it away, though I may change my mind tomorrow.  A different world, a different time.

I need to take a trip, but I don't have the internal resources just now.  Sometimes the fates have their own inevitable plans.  For now, I'll just have to flow with the tides.
Posted by cafe selavy at 8:55 AM