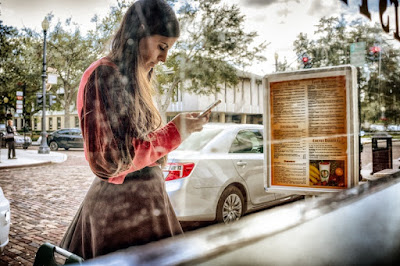 Tried stretching our legs yesterday.  I did the first earth-based run in six months (I think) yesterday on the old exercise course.  I ran at an old man trotting pace, but my goal was not to re-injure myself.  I did three laps, a total of 1.5 miles.  Plus a long walk.  No injuries.  Success.

I had to let Ili go for a run afterwards as my pace was silly.  Not ridiculous, but silly.

Afterwards, she was feeling punky as we have been fighting off some bug.  She wanted a McDonalds Happy Meal.  She said that is always what she desire when she is coming down with something.  I didn't want that, of course, so we decided to get takeout, hers from McDonalds, mine from a new place called Hunger Street Tacos.  When we got there, she decided on that, too.  It was our first visit, and neither of us was impressed despite the impressive look of the place.

We stopped at McDonalds afterwards.

And then we decided to take a trip to an old area tourist attraction, one that was included in a documentary I worked on with Q many, many years ago.  It featured a now semi-famous author as main informant and a number of famous attractions.  I may be confusing things here a bit, for it was long, long ago, but in the end, it won an award of some sort.

I've been a couple times since then.  Maybe only once.  Back "in the day," it was easy to get to and usually not very busy.

Skip ahead.  The highways are under construction, the routes have been diverted, and the traffic was hideous.  When we got there, Ili was ready to go home.  We considered it, but when we found out we got in for half price because we are residents. . . well, who can turn down a deal.

So we entered GatorWorld.  It had not changed much in the sixty or so years it has been in existence. Big lakes and lagoons full of alligators of every size greet you as you pass over bridges and walkways.  The crowd was very international, people from India and the Orient beyond, from Guatemala and Mexico and the countries of South America.  Why, I wondered?  How would they know?  But the internet has made all things accessible now.  This attraction, we determined, was like a trading route.  It was the place where diseases from every foreign port made its way into my own home state.  It was an international petri dish.

Everyone had a cough.

We wandered about the pens and cages of animals.  The native cougars and wild cats made Ili weepy stuck, as they were, in there small caged pens.  I wanted to see Bonecrusher, the largest crocodile in the world, but as fate would have it, he had died.  There was a Bonecrusher II, but we were more thrilled by the giant albino gators.  "White Gators," they were called, each one in its own glassed pen.  Next door was "Dogeater," a huge, black alligator that was reportedly so mean they could not keep it with the others.  He was big and athletic looking, and Ili remarked on the segregation.  The place has been owned by an old cracker family all this time, so I suggested it was not unintentional.  Imagine putting Dogeater in with the White Gators, I said.  It would be terrible.

We looked at the snakes and walked through the swamp and read about the various plants and animals, and then it was time for the main feature, the Gator Jumparoo.  We lined up on the railing along with the others and waited.  And waited.  And when the show began, it was some corny cracker version of a comedy show, and it was all taking too long.

On the way out, Ili bought a water.  The woman, a tough old bird with a buzzcut and piercings, told us a better way to go home, a way I had never known existed.  She was right, and we were home in half the time on a much more interesting route.

We cooked and crashed.  A little t.v., and bed.

Today is dreary and cold, but not like the rest of the country.  Ili is sick and there will be little fun today.  I will read and watch t.v.  Sometimes life is like that.  Just waiting and hoping.
Posted by cafe selavy at 10:17 AM