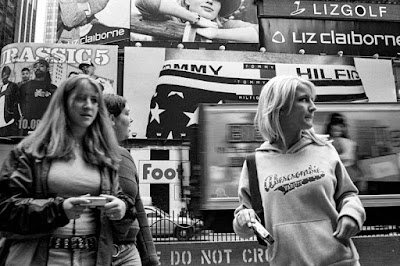 More turn of the century photography.  I've been scanning old negatives that have never been scanned.  Things that once didn't seem to have much of note in them are beginning to look better now.  It may be a little too soon still, but some of the cultural touchstones in these images are starting to look interesting.   All it does for me is make me regret not having done only this, or at least much more of it.

It is difficult, though, as I have found out over and over and over again, to find someone who supports such interests.  It is hard enough to have confidence in yourself, but when everything else in your life is scoffing or telling you, "no, no, no," it is easy to cave.  Someone like Stephen Shore who got a major major show at the age of seventeen. . . well, we can't all be Stephen Shore, now, can we?  Or Eggelston who never had to work one day of his life.  I mean, that makes it much easier to pursue your interests.

But for those who take a timid step into the creative world, uncertain and unsure, those looking for a little approbation but finding, instead, only repudiation for any number of reasons. . . .  It is probably for the best, though, I guess.  There is so little talent, right?  Or is it that there is so little courage?

I think of modern art, the painters who struggled and carried on against all the criticism and complaints even at the cost of their economic and even physical existence.  Monet.  Modigliani.

But I was never fucked up enough to pursue it against the household strictures, so what I have are the photographic equivalents of the wooden fowl carvings done by the old guy in his garage on Saturdays.  You've seen him, sitting in front of the open garage door with his tools and a driveway full of perfectly polished life-sized ducks and geese and seagulls.  There he is, sitting in his plastic webbing lawn chair, fine grit sandpaper in hand as he puts some finishing touches to his latest masterpiece.

Somewhere, I think, he has a carving of a nude figure that his wife doesn't allow him to display.

I became something of a standout in my university photo program when I brought back my images from my 3 month long hitchhiking and bus trip around the country.  But then I was out.  It was time to begin making a living.  There would have to be something wrong with me to continue pursuing snapshots.  Who would do that?

Oh, and there is, I am convinced.  Who, indeed.  Only those people like Lauren Greenfield who somehow have gotten away with it (link) (link).

You see, I didn't start out with confidence.  I surely didn't develop any along the way.

C.C. speaks of his own creative desires and how they were met by his friends, family, and community when he was starting out.  He should have gotten a job at the rubber plant where the rest of his family worked, he says.  They all thought there was something wrong with him.

But it is not a good idea to tell somebody else's story for them, so I'll leave this alone.

I'll continue the scanning.  I'll pass along the occasional image here and there.  But I'll have to leave town if I want to make pictures now.  People look at me like a strange dog if I try to photograph in my own hometown.