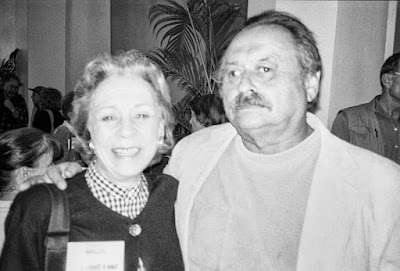 This is a historic photograph that is only given to us through the advances of modern computer technology.  I've had the negative of this picture since the early 1990s, but I have never been able to pull an image from it--until now.  I was going through old notebooks of negatives and proof sheets and decided to try scanning this one more time.  Then I took into a couple different photo programs and finally got this.  It is the meeting of John Steinbeck's wife and Jim Harrison at a Key West Writers Conference.  I was standing there when she walked up and introduced herself.  Harrison, who had been a mean old bear toward people, lit up.  He talked about the correspondence between himself and her husband and as they chatted, I asked them to let me take a picture.  I had a little Olympus XA with an attached flash, but something went wrong and the flash terribly overexposed them both.  Why I only took one, I'll never understand.

What do I do with such a photo?  It is important, I think, but to whom?  Maybe a Harrison biographer.  Maybe.

Or, like all my photographs, it will go into a dusty room to get thrown away one day.  The permanence of photography.
Posted by cafe selavy at 9:24 AM