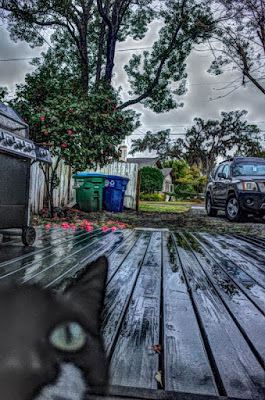 This is the little black and white cat that comes to my kitchen door and stares in from time to time.  It (he or she) has finally quit running away when I walk up to talk to him/her.  I was even allowed to put a camera to the window while it looked in.  When I open the door, however, it runs away.  It used to disappear, but now it goes under the patio table.  If I go out and talk sweetly, as I always do, it looks at me and sometimes, after rubbing against the table leg, will take a step or two towards me.  I don't want another pet, but it is fun to have one come say hi from time to time.

I watched the State of the Union speech last night.  Most of it.  It was boring and I turned it off and went to bed after an hour.  I needn't have watched it at all, and I am disappointed in myself, but, I told myself, who knows what might happen?  Nothing happened.  Trump looked like his best self (which isn't all that) and Melania wore white.  Trump did a masterful job of braying, and the dems looked like what they are.  Pence looked like an evil Nazi with that fake smile and Paul Ryan looked like a serious ghoul.  Trump kept jutting his jaw in his best Mussolini imitation when the Republicans stood for an ovation.  He looked to his left about ninety percent of the time.  Ironically, that is where the Republicans sat. 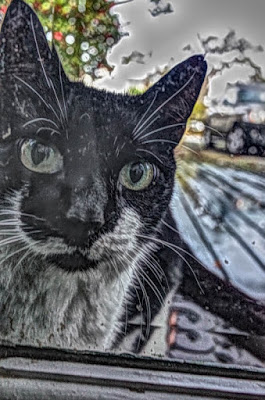