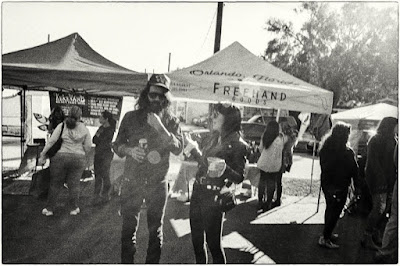 The underclass has come up with a clever plan for avoiding a #MeToo conflict.  They just wear t-shirts that say, "I want to have sex with you."  Up front.  I don't know if that will hold up in court, but they sure as hell think its funny.  One guy I talked to who was wearing the shirt said "Hell yea I mean it.  Tell me a guy who isn't looking to have sex.  It's stupid.  Women know you want to have sex with them.  Everything is just a dance around that.  What kind of fucked up country has this become?"

He was a roofer.  I guess he didn't feel he had any coercive power over anyone.

I don't need to go over it.  You all know what last night was.  The papers made a big deal out of it for a week.  So Ili and I went out to look at it.  It was a beautiful night for looking at the moon, completely clear, without a cloud in the sky.

"It looks closer," she said.

And then we went back into the house.

I've been looking at the moon for years.  It is a wonderful thing.

But man, I think it has been fucking with me.  I haven't felt right.  Sometimes I think it is a touch of the flu, and then I think it is something else.  Who knows.  Astrology will serve you just as well as anything else in The Age of Trump ©.

I am extremely weary.  Have been for awhile.  All I want to do is come home, eat, and lie on the couch.  I am afraid I am extremely boring.  Last night, I told Alexa to play the Beatles first album.  After a bit, Ili told her to turn it off.  Jesus.  What is wrong with me?

What do I know?  Every show people tell me is a must-see has some fantastical element in it, vampires or demons or transformers or something.  I can't stand that stuff.  They tell me, "No, no, it is not really about that," but I have no interest.  And the things that I know that once fascinated others. . . well, nobody gives a shit now, really.