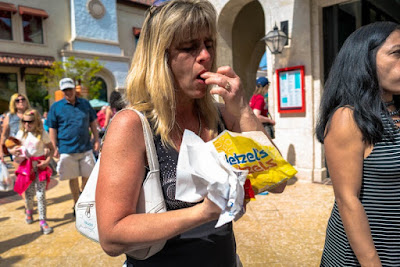 Critics abound.  The number of critics is amazing.  If you try creating things, any things, you will get to meet them.  Unsolicited.  The moment you try to get "out there," though, is the make or break period, and without positive reinforcement, some people can't continue.  Others do. . . for awhile, at least.  Some we hear about.  Some we hear about too late.  Some are never "discovered."

Yesterday was International Women's Day.  To celebrate, I revisited some of photography's great women photographers.  They had varying degrees of success, or didn't.  Vivian Maier, of course. Diane Arbus.  Francesca Woodman.

Of the three, only Arbus had any recognition.  Yesterday, the N.Y. Times ran an article on women who had been overlooked in their obituaries.  Here is Arbus's:


1923-1971
Diane Arbus
A photographer whose portraits have
compelled or repelled generations of viewers.
BY JAMES ESTRIN

Diane Arbus at the Rhode Island School of Design in 1970, holding a copy of “Child with a Toy Hand Grenade in Central Park, N.Y.C. 1962.” Stephen A. Frank

Diane Arbus was a daughter of privilege who spent much of her adult life documenting those on the periphery of society. Since she killed herself in 1971, her unblinking portraits have made her a seminal figure in modern-day photography and an influence on three generations of photographers, though she is perhaps just as famous for her unconventional lifestyle and her suicide.
Her work continues to spark fierce debate among photographers and intellectuals. Are her portraits — of circus performers, transvestites, mentally disabled people and others — empathetic acknowledgments of a shared humanity, or are they exploitative depictions that seize upon their subjects’ oddities to shock her audience? After her death, many critics who fancy themselves armchair psychiatrists have tried to analyze her impulses, searching for the role these encounters played in Arbus’s psyche.
She was born Diane Nemerov on March 14, 1923, to David and Gertrude Nemerov, and had two siblings. Her family owned Russeks, an upscale Fifth Avenue department store founded by her maternal grandparents. Raised in spacious apartments on Park Avenue and Central Park West in Manhattan, she was attended by nannies, maids, a cook and a chauffeur. At 18, she married Allan Arbus, an aspiring fashion photographer, and together they started a fashion photography company with the family store as their first client.
After having two daughters, Doon and Amy, she quit the business to go off on her own as an editorial photographer and artist. Though the couple separated and eventually divorced, they remained close. Allan Arbus later became an actor and played the psychiatrist Dr. Sidney Freedman on the television series “M*A*S*H.” He died in 2013.
Arbus worked for publications such as New York Magazine, Harper’s Bazaar and The New York Times Magazine, shooting portraits and occasionally fashion, all the while barely cobbling together a living even as her artistic success and reputation in the photography world grew. During her lifetime, there was no market for collecting photographs as works of art, and her prints usually sold for $100 or less. Today, the same prints garner hundreds of thousands of dollars. After suffering prolonged bouts of deep depression, Arbus killed herself on July 26, 1971, by consuming barbiturates and slashing her wrists. She was 48.
Throughout her career, Arbus broke taboos — in her portraits of people pushed to the edges of society, and in her personal life. She often befriended her subjects and even seduced them on occasion, according to her most recent biographer, Arthur Lubow, in “Diane Arbus: Portrait of a Photographer <https://www.nytimes.com/2016/06/03/books/review-arthur-lubows-diane-arbus-biography-recalls-an-underworld-voyager.html>.” Starting in the mid-1960s, she photographed couples in bed as well as orgies in which she sometimes participated, according to Lubow.
John Szarkowski, the influential director of photography at the Museum of Modern Art from 1962 to 1991, championed her work and included it in his groundbreaking 1967 exhibit “New Document. ” A year after Arbus’s death, he curated a posthumous exhibit of her work that heroicized her and helped to create a legend around her. In the wall text for the show, he wrote that her honesty was “a reward bestowed for bravery in the face of the truth.”
“Arbus did not avert her eyes,” Szarkowski went on. “She stuck with her subjects, exploring their secrets (and thus her own) more and more deeply. She was surely aware of the danger of this path, but she believed that her bravery would be equal to the demands she made of it.”
Her critics were equally passionate. Susan Sontag savaged her in a 1973 piece for The New York Review of Books.
“Anybody Arbus photographed was a freak — a boy waiting to march in a pro-war parade, wearing his straw boater and his ‘Bomb Hanoi’ button; the King and Queen of a Senior Citizens Dance; a thirty-ish Westchester, NY couple sprawled in their lawn chairs; a widow sitting alone in her cluttered bedroom. In ‘A Jewish giant at home with his parents in the Bronx, NY, 1970,’ the parents look like midgets, as freakish as their enormous son hunched over them because the living-room ceiling is too low.”
Still, many others embraced her after the 1972 MoMA exhibit and the publication of “Diane Arbus: An Aperture Monograph <https://aperture.org/shop/diane-arbus-an-aperture-monograph-book/>” the same year. Her fame seemed only to grow as subsequent biographies delved into her private life. For some, she became the Sylvia Plath of photography, admired in part because of the tragic elements of her life.

Arbus posing for a portrait in the Automat on Sixth Avenue between 41st and 42nd Street in New York City, circa 1968. Roz Kelly/Michael Ochs Archives, via Getty Images
As a young photographer shooting street portraits at 16 with my father’s East German-made Exacta camera I, too, struggled with Arbus’s work. Attracted to her bold images of those outside the margins of respectable society, I was also repelled by what I perceived to be an underlying coldness toward her subjects.
My father, a physician, saw me looking through the Aperture monograph and told me he knew something of her work. Eddie Carmel, the Jewish giant who was photographed with his parents by Arbus, was my father’s patient and over the years the two had become friendly. My father described him as smart, sensitive and very funny but living a tragic life and unable to fulfill his most cherished desire. Carmel wanted to be a standup comic but could not break into mainstream show business because of his size. Carmel liked Arbus as a person, he said, and this wasn’t the first time she had photographed him. But Carmel didn’t care for the image with his parents because it didn’t capture who he was inside — just what he looked like outside.
Arbus did not have a social justice agenda like her contemporaries, the embedded documentarians Danny Lyon <https://www.icp.org/browse/archive/constituents/danny-lyon?all/all/all/all/0>, Bruce Davidson <http://pro.magnumphotos.com/C.aspx?VP3=CMS3&VF=MAGO31_10_VForm&ERID=24KL53ZTH6> and Larry Clark <https://www.icp.org/browse/archive/constituents/larry-clark?all/all/all/all/0>, who also photographed outsiders, and she was a portraitist who often spent time with her subjects, unlike the street photographers Garry Winogrand <https://www.nytimes.com/2014/07/06/arts/design/when-images-come-to-life-after-death.html> and Lee Friedlander <https://www.icp.org/browse/archive/constituents/lee-friedlander?all/all/all/all/0>, who were also pursuing their personal visions. Her beginnings in fashion and magazine portraiture honed her ability to produce instantly captivating, straightforward images, Matthew Witkovsky, chairman of the photography department at The Art Institute of Chicago, said in an interview.

“She was moving toward something that could be seen as art-world acceptable, though that didn’t really exist for photography then,” Witkovsky said. “She somehow managed to take all of the conventional categories that you could put photographic work in at that time and then crosswire them without short-circuiting them. She opened the door so you can be a photographer and have the highest art aspirations.”
After decades of intense examination of her work and life, perhaps there is room to understand Arbus as a woman driven by artistic vision as well as personal compulsion, and her photographs as documents of empathy as well as exploitation. Arbus herself hinted at the difficulty of understanding and interpreting images.


“A photograph is a secret about a secret,” she said. “The more it tells you the less you know.”


They did her no favor here, I think.

Last night, I watched a documentary on Francesca Woodman. Like Arbus, she committed suicide, but unlike Arbus, she gave up at 22 (link). She found no success, and perhaps too much negative criticism. That is what happens, perhaps, when you believe too much in what you do.

I'll tell you about my own experience sometime, but it is not International C.S. Day, so it will have to wait. Once you submit yourself to their opinions, though. . . .

Vivian Maier, of course, was the bomb. She knew what to do. Keep it to yourself. All that great work. . . .

But then again, how'd that work out for her?
Posted by cafe selavy at 8:05 AM