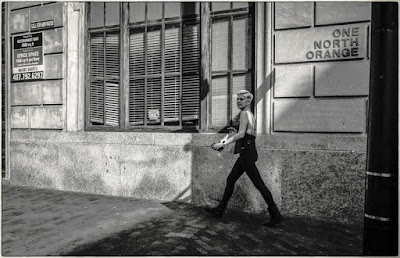 This photo was taken by Ili from the back of the Vespa.  Everybody's an artist. Speaking of which, we watched "Mother" last night.  Don't.  It is one of the worst movies I have ever seen.  "Waterworld" was ten times better.  The movie is dominated by close ups of Jennifer Lawrence walking through an old house breathing and sighing and giving little starts of horrific surprise.  The main line in the movie, and it had to be repeated thirty times, was, "Excuse me!"  It should win an award for worst screenplay.

The movie is said to be a Christian parable, but I don't care about that.  For me, the movie was about the incredible ego of the artist and how success is measured in admiration for his/her work.  That's a nice theme, if uncomfortable, but it needed a better vehicle.

Who doesn't want admiration?  Can you trust someone who says s/he doesn't?  Yesterday, Ili and I went to one of the famous restaurants in our own hometown.  Call it Fauntleroys.  I have known Fauntleroy for decades, since before he opened his first restaurant and had a little wine and cheese shop on the Boulevard.  He came from mommy's money, or so it was told, and was married to the all-time money winner on the old t.v. gameshow, "Concentration."  She was a nice woman with a good brain who was also attractive.  But Fauntleroy fucked that up when he opened his new restaurant that was all windows.  He needed better cover, it seems, for one night, after the place was closed, his wife drove up to see him screwing another woman at the bar.  How such a thing can happen. . . well, who knows.  But his wife, being a clever woman, drove her car through the glass double-doors, then backed the car out and entered the restaurant.  Now no one was there but the three of them, but I got this tale from the girl who Fauntleroy was screwing, so I think it is accurate in the main.  Fauntleroy's wife took up one of the big chef's knives and came after him, and he, even though drunk, was deft enough to escape and avoid being carved up like the swine he, at that moment, seemed to be.  He did, however, leave my friend there to fend for herself all alone, and she, having been blocked from the escape route taken by Fauntleroy, ran naked into the bathroom where she put her back against the sink and both feet against the door.  She was a big girl (ahem), and, though admittedly quite scared, she was able to prevent the wife from entering.  She said she stayed there for a long time, naked and afraid, but after awhile, she ventured to peer out into the darkness of the restaurant.  Everything was still.  She was alone.

By opening time the next day, the doors were replaced and the wine cleaned up so that no one would ever know what had happened.

But nothing ever stays secret long.  Ho-ho!

I don't go into Fauntleroy's much any more, but Ili and I had mimosas and sandwiches there yesterday, and Fauntleroy was there, too.  He came over and said hello and we talked for a bit.  Then his business partner came out to say hello, and the barmaid, remembering me as well, was very chatty.

The point of this sordid story is that I enjoyed the attention.

Really?!  That's the point of this story?

Sure.  And I would take more, too, if I could get it.  I would like to be an admired artist, but, as Aranofsky's film so poorly illustrates,  they are such assholes.

It is a pretty day, and I must figure out how to spend it.  Such is life.  Such is a very good life.
Posted by cafe selavy at 7:52 AM