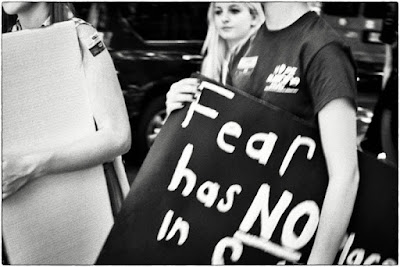 I didn't go to the play or to the hog calling yesterday.  Rather, I went to the March to End Gun Violence.  Ili said the play was o.k. and my mother told me the hog calling was a bust.  Now, as I am sure you know, I am a liberal, but group activities are not my idea of a good time, and I find that the voice of the masses is often confused.  That is not to say that I am pro-gun.  I hate the NRA as much as anyone, and I don't own guns.  I dislike gun culture and hunting by people who buy their food at the grocery store.  I shot a gun once when I was in high school.  My father and I took a trip back to Ohio where he grew up, and we went rabbit hunting with my cousins.  We were in a mowed corn field that was covered in snow.  I was given a .22 caliber rifle that used to be my father's, I was told.  I'd never shot a gun before and nobody gave me any instructions.  I was on the end of a line of hunters who walked through the cornfield scaring up rabbits.  One ran in front of me and I swung my rifle around after him.  Everybody hit the ground as he rant through them.  Oops.  A bit later, a rabbit ran out front and I took aim and fired.  The gun came apart in my hands, the stock separating from the barrel so that it came up and hit me in the forehead.  I was done.  I've never shot a gun again. 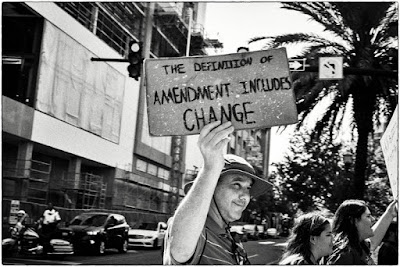 I'm sure I could, though.  I am a natural athlete.  I am also a hippie, though, trained in the ways of peace and nonviolence.  That was much more to my liking.  It was more fun. 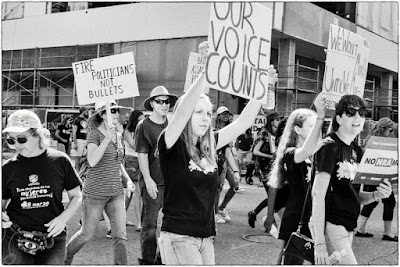 Ili asked me about the march and wanted me to explain what the kids were asking for.  I gave a vague, inarticulate explanation.  So this morning, I went looking through the Times to find the answer.  This is what I got:

The young people delivered an anguished and defiant message: They are “done hiding” from gun violence, and will stop at nothing to get politicians to prevent it.

The most powerful, and impassioned, moments came from the surviving students of the Parkland shooting, who declared themselves angry, impatient and determined to stop the slaughter.

“Today, we march,” Ms. Tarr said. “We fight. We roar. We prepare our signs. We raise them high. We know what we want, we know how to get it and we are not waiting any more.”

It sounds a bit jejune, as might be expected. 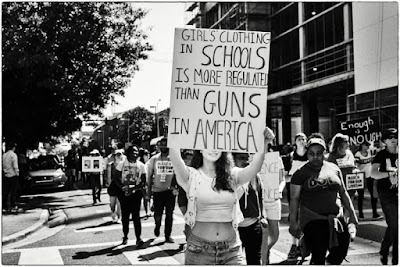 Still, it is as specific, I guess, as arguments on the other side.  Should we all be packing to prevent the bad guys from taking over? 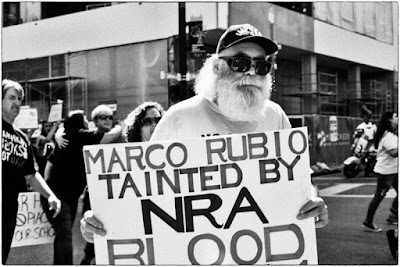 There is a lot of chanting on both sides.  I am guessing, though, that both agree that shooting school kids is a terrible thing done by very bad people. 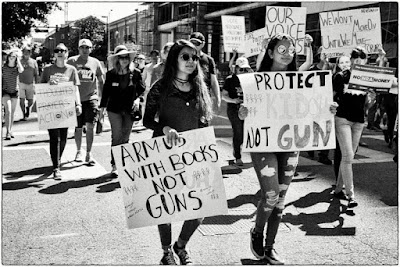 There were a lot of bumper sticker style slogans which are attention grabbers, but I am not a sloganeer. 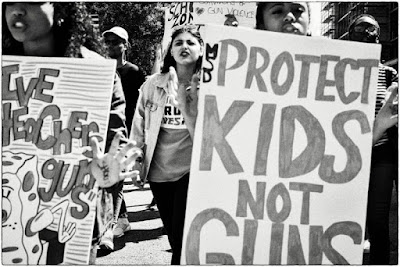 There was much of the "either/or" argument signs.  Some were non-non-sequitors. 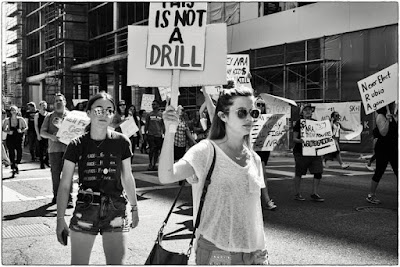 But before I get reamed, let me say that I am all for protecting children.  Most of you have them, and so it is very and deeply personal.  I get that.  You could see it in the crowd.  This was not a parade of children but of parental-aged marchers.  I heard much talk of the generational thing, old hippie-looking people wanting the streets filled with student protests once again. 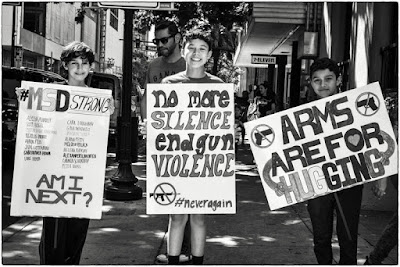 And they were.  All across the land.  People surely felt a sense of unity. 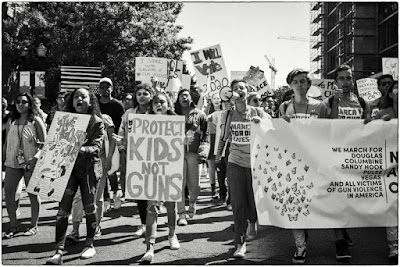 And so I went out to try to capture the moment, the mood of the thing, the historical importance of it, for surely these are historical times. 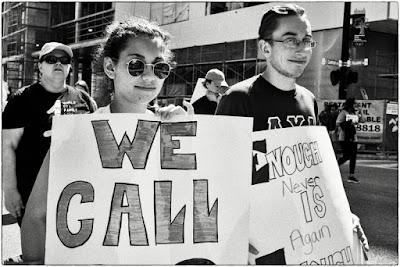 I had my Leica with a 50mm lens attached.  For those of you who do not know, trying to capture moving things with a 50mm manual focus lens is hard.  But I've learned to zone focus and to accept a marginally focused picture and even love it. 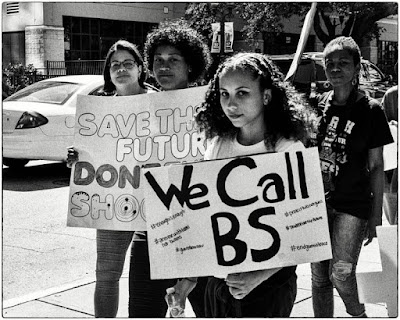 I decided on black and white rather than color as that is what the issue has instilled in us, I think.  It is more graphic as is the issue. 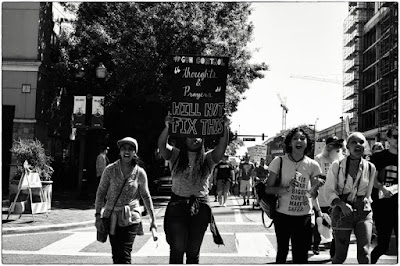 I was lost in it all, trying to distill something from the moment, trying to decipher the crowd, trying to be both in and out of the thing at the same time, but over and over, I heard my name called out.  I knew many people marching, it turned out, something that unnerved me a bit as I try to stay invisible.  I was proud, however, to recognize and be recognized at such an event.  I even posed for pictures holding other people's signs.  I mean, how can you not be on the side of non-violence? 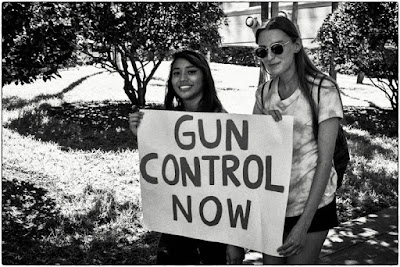 And, of course, it is always good to find a place where kids and their parents agree. 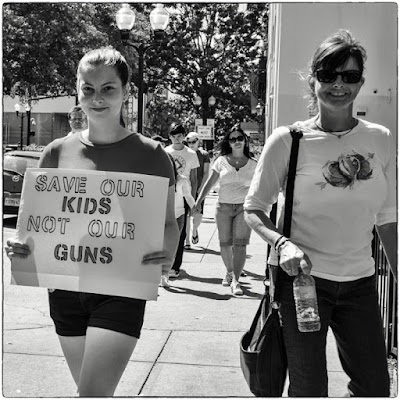