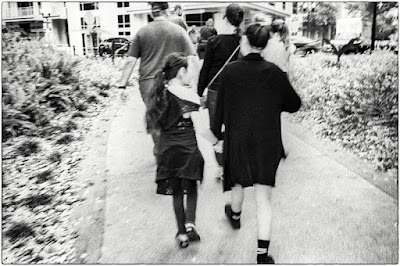 I am cursed, of course.  I am charmed, yes, and have been very lucky in some ways, but I am careless and often must pay for that sin.  Maybe I am just becoming incompetent with age, though, which is a universal curse, I guess--Adam's Curse.  But old age and death are not my topic.  Nope.  It is Freud, I think, who said, "There are no such things as accidents."

I have been shooting film this week, a lot of it.  This is probably because I bought the Leica M Monochrom, the only black and white digital camera.  I am like that.  I buy a thing and feel guilty and don't use it for a long time.  It is a flaw, or maybe two flaws, the desire and the guilt.  Nonetheless, I took myself to the streets and shot lots of black and white film in four different cameras.  I was using up some rolls that had been sitting in my Olympus XA and in my Leica CL for far too long.  Those are teeny-tiny little film cameras that are wonderful, and I took them to the big downtown main drag and shot for an afternoon.  I also shot with my Leica R5 which is an SLR and is wonderful fun, a beautiful camera.  I also finished up some film in my Leica M7.  Then, just for fun, I shot some rolls with my medium format Mamiya 6.  So you see, I had been busy.  And on those rolls were many images I knew in my soul were going to be great.  That is the way of film, of course.  You can't wait to see the greatest images you have ever shot.

Film is precious and delicate.  You have to keep track of film rolls.  I've lost plenty in the years I've been shooting.  You have to keep track of it and you have to keep it cool and dry.  And when you develop it, you need to be precise. And this is a problem for me.  I mix the chemicals approximately.  I mean, I am not a stickler.  Same with temperature.  Again, you need to be precise.  For me, however, a degree here or there. . . .  Time is of the essence, as they say, and when you put the film "in the soup," timing must be rigid.  As with temperature, however, a minute here or a minute there. . . .

But I was excited to develop some film yesterday.  Ili was out of town, so I had the entire day to shoot and develop film.  I mixed up some new developer and stop bath and fixer, then went downtown and finished up a couple rolls and shot some more that I wanted to experiment with.  When I came home, I put my big changing tent on the table on the patio and grabbed two rolls of film that I was least concerned with, the ones from the Olympus and the CL, the scissors, the tank, the reels, etc.  And, of course, I had trouble getting the film on the reels.  I am not a dextrous person, I think.  I don't draw well, and I was never good at coloring books when I was a kid.  Most of all, I am impatient.  Putting film on reels is a test for me, so I try to think it is like therapy.  After far too long putzing around, I got film loaded, though, and into the tank.  Half an hour later, it was hanging in the bathroom to dry.  Everything looked fine, the chemicals were good.  There was just one problem.  I had forgotten to mix the developer 1:1 with water.  I had the developing time wrong.

So. . . I took my two most precious rolls of film into the changing tent.  These were the ones I looked forward to.  These were the ones that I had changed my shooting style, no longer shooting from the hip with a wide angle lens but putting the viewfinder to my eye and focussing the 50mm lens.  I shot a little ballerina on the street.  I shot a well-dressed woman standing and talking on her cell phone in a vacant lot full of bums.  These were among the things I could not wait to see.

And everything in the changing tent went swell, and this time, I was ready to mix the developer as it should be.  I had all the times written down.  No mistakes.  I pulled the developing tank out into the light and set it on the edge of the table.  Then I did something in the tent, I don't remember what, but the tent shifted and bumped the tank off the table.  It hit the deck and the lid popped off.  Just like that, 72 exposures were gone.

I won't try to explain the dizzy, despairing sickness I felt.

Get back on the bicycle/horse, whatever they say.  I did.  I had three more rolls, and I wanted to experiment with another developer, Rodinal.  I had never used it before.  It is the oldest of all film developing formulas, and it give sharp images and a lot of big grain.  It is O.K. for the bigger medium format film, but I wanted to try it on 35mm, too.  So I mixed up the chemicals and put the film in the bigger tank and began.  Halfway through, I realized, though, that I had only used half the amount of developer I needed.  I measured it out for the smaller tank.

Jesus Christ, I am an idiot!  I had ruined all the film I had shot during the week.  I had spent the day fucking up.

There are no such things as accidents. 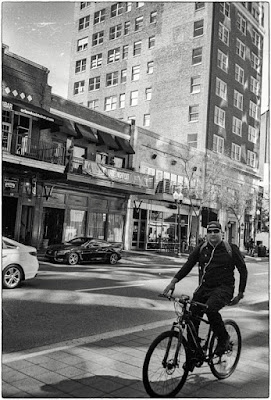 Here is an image I didn't ruin that I shot through the viewfinder with the little Leica CL.  And here is one from the Olympus. 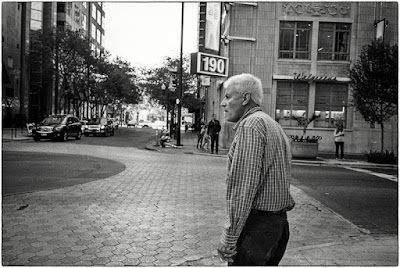 They are not all that, but they are two of the few I didn't completely ruin yesterday.  They are what I have.

Sick from failure, I poured myself a drink.  I would start again, I thought.  I loaded the cameras with new film.  It was early, but I was hungry.  I took a shower and got on the scooter and headed up to the hipster noodle shop.  I took my cameras.  I thought I might shoot something, that it would make me feel better.  But the little noodle shop was full.  I wanted noodles, though, and put my name on the list.  I sat and looked at the crowd and wondered at the things I didn't know.  Can you just wear anything?  Is there a fashion book I haven't seen?  Why am I the only fellow with long hair?  I watched overly confident people having what looked like a lot of fun.  I sat on a stool clutching my camera bag knowing that the cameras weren't coming out.  I waited to be seated at the small bar looking into the kitchen next to another fellow who was eating alone.  The bowl of ramen and chicken and eggs and spices would be perfect, as would the conversation with the young man who worked for GE as a field engineer all around the country developing power plants.  And then I would go home to have a whiskey and fall asleep.