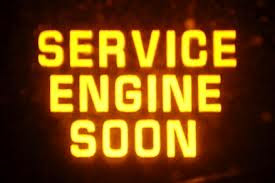 Depending upon the make and model of your car, you will see some variation of this.  It could be "Check Engine" or something similar.  All of these messages need to be standardized so that we, the consumers, know what they mean.  Here is what I suggest flash across the screen.

Because that is what it means to the fix-it shop.  My light was on yesterday when I took my 2005 Xterra to the dealer.  I swear to you, the service agent or whatever they are called got a boner when he looked at my dash.  His breath became slightly audible and his voice creamy when he asked, "Do you want us to check that?"  Oh, baby.  I'd gone it for an oil change, a tune-up, and a detailing.  "Sure," I said.  He'd call me, he said, and let me know what was going on.

Not today, I told him.  He was rude when I picked up my car as if I were some sort of cock-teaser.  I'd be sorry if I didn't give in, he insinuated.  I needed his service of which it would be a mistake to deprive myself.

I stopped by my house before I went to my mother's.  The heat index was over 100 degrees.  My a.c. couldn't keep the house at the temperature I'd set my thermostat.  It hadn't healed itself since last summer.

I was glad I hadn't bought the Leica M10.

All I want is that Leica M10.  Now more than ever.


I was pleased to read an article about the resurgence of cottage cheese this morning.  They are beginning to make it in small batches now.  There is a lot wrong with that branding.  "Small batch" is too similar to "low flow."  Both make me think of old men's prostates. 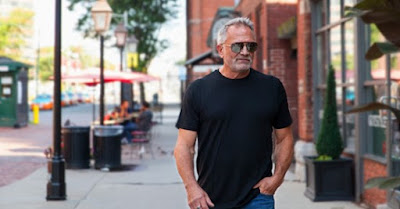 They will probably brand it "artisanal," a word that has been  as overused now as the word "haptic."  They are mixing it with fun stuff, though, berries and nuts and maybe even barbecue.  They are taking their lead from the yogurt companies.  A change of name has been suggested since "cottage cheese" has an association with dieting.  Perhaps frommage de la petite maison.  Surely they will begin making it from goat and sheep milks.  There are tons of naming possibilities there.  Everything is marketing.

I've stolen the image of the sexy older guy from an ad for marino wool t-shirts.  They are expensive as hell, of course, which is, I assume, why they chose the image of a "sexy" older guy.  Ain't no kid gonna buy it.  But this could be an ad for Cialis or Flo-Max or any other elder-drug.  Or maybe Harley-Davidson.  Surely the fellow has that 1965 red convertible Mustang.

I'm cool.  My t-shirts come from the sale table at The Gap.  O.K.  Not so cool.  Haynes would be better, I guess, but they are too bulky for the sunny south.

Don't get me wrong, though.  I love me some good advertising.  If the dealer's were smarter, they'd make that "Check Engine" light a lot sexier.  I have a few suggestions.
Posted by cafe selavy at 8:54 AM