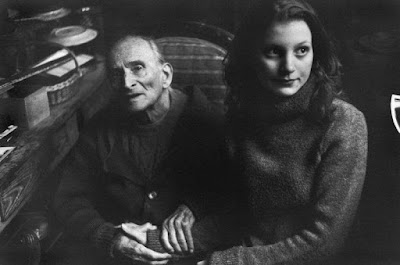 The problem with writing in the morning is that usually there are only two things on your mind--how you are feeling or, having just read it, the news.  Then you begin, either to complain, justify, or comment.  You either write about yourself and the state you are in, or you write about how you feel about other things.  Neither of these were originally your intent, but that is, in the popular vocabulary, "what you've got."

I never wanted to be an old guy with a clipped white beard smiling with weird pride as he drove a carefully preserved, well-kept 1965 Ford Mustang convertible around town.  The idea has always sickened me.  It is not that I don't appreciate the craftsmanship and design of the thing.  It would just feel too similar to putting a sign on an old dog that said, "Old Dog."

There is a reason why young people only want to see old people portrayed in a certain way.  It is self-preservation.

See, when I look at that picture, I think, "Man, his girlfriend is cute."  I'm not supposed to think that way, or so I'm told.  Whatever.  You can think whatever you want.

O.K.  So Balthus looks like he is gasping for air like an ill guppy struggling for survival in a dirty aquarium.

Jesus, I have to quit this.  But it is difficult when every day the N.Y. Times is running articles on depression and loneliness and CNN wants to make sure Anthony Bourdain doesn't kill himself again.  Apparently young people are more miserable than ever, Americans feel a lack of meaningful endeavor in their lives, and yoga is saving some farming communities in China (link).

Life is what you make of it, they say.  Some say.  Those who think in cliches and live their lives as mandated by them.  I took my mother to the doctor yesterday.  Oh, she is healing up swell and doing fine.  She'll need me to help her with therapy for another month, he said.  That put an end to any thoughts I had about going anywhere for a getaway.  I read.  I walk.  I go to work and come home and cook.  I really need to get back to yoga.
Posted by cafe selavy at 7:24 AM