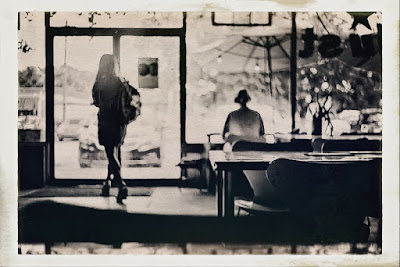 I am up too early this morning without energy or good feelings.  I feel like a day in bed, but I have much to do at the factory today.  I wanted to write a good story here, but a good story requires good feelings, and I haven't any as I sit here and listen to my stomach rumble and gurgle.  I just want more sleep.

I must skip the boring chronological narrative I just began to write.  It was just words on a page.  They made sense, but what was I telling to whom?  Who gives a shit?  I mean it was like a freshman comp assignment:  "My Truck and My Brother's Truck."

His is a four speed, mine a five.  Mine has leather, his has cloth.  Mine is newer than his by two years and more styling.  It makes me feel like I'm pimpin'.

"Jesus Christ, kid, who are you writing this to?  Who cares?"

Let me skip ahead.  After a day of the usual Sunday things, I called my mother to tell her I was heading back to her place for dinner (I need to quit saying "home") and asked what we were having.  She was making some frozen leftovers that I had rejected once before, this after asking her what she wanted for dinner before I left her house.  I'll get something to cook, she said.  I was more than pissed.

I didn't go back to her place to eat.  Instead, I thought I'd try the little noodle shop that is so difficult to get into, but it was Sunday and it was raining after a powerful storm, and it was about the right time between the first and second servings, so I thought things might work out.

I pulled into the crowded parking lot and got a spot from some people who were leaving.  Yes, I thought, this is good luck.  First diners.  But inside, the place was packed wall to wall.  The couple in front of me at the hostess stand were told the wait would be an hour and a half.  I asked for a seat at the chef's table, and the pretty tattooed girls smiled at me and said, "Right away."  It is not always bad to dine alone.

I looked around.  The place was full of very beautiful women.  I'm sure there were men, too, but I don't remember any.  Just women joyful in their youth and beauty.

The sous chef was new.  At least to me.  She was slim, dressed in black jeans and a black long sleeve t-shirt that had the markings of a weegee board on the front.  Her hair was as black as her jeans and tied into pig tails, a red bandana wrapped into a headband and tied in front.  Her eyes were dark and her eyebrows darker.  She had the smoothest skin I'd ever seen.  When she looked up at me without raising her head and smiled. . . .  A man can fool himself very easily.

But as I looked around the kitchen where the food was being prepared, I thought about Anthony Bourdain's "Kitchen Confidential."   Sunday is when all the shit food gets cooked, the leftovers from the week before the new food shipments arrive on Monday.  And when the bowl came, I knew that that was right.  The cut chicken thighs were tough and gristly, and even though the soup was very hot, the center of the halved hard boiled egg was cold.

As this morning tells, I was right.

Last night I dreamed of a medium sized blonde wearing a short dress, lying on a couch, reading a book.  I could not see her face, but I know who she was.  She lay twisted on her side to look down at the book resting on the couch so that the hair fell over her face, a slight gap between her knees so that I could see the strength in the muscles of her inner thighs.  I don't often have such dreams, but I had this one all night, or so it seems.

What is the point of telling this?  Beats me.  But I can tell you that it is a lot more interesting than the narrative I wrote about running the exercise course.

"To whom are you telling this?  Who cares?"