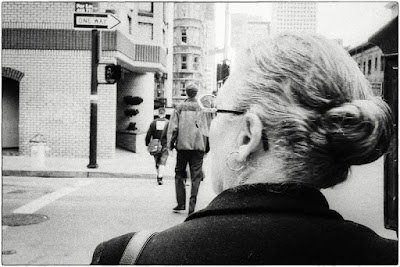 This is the back of a woman's head in S.F. way back in the old days when I shot film instead of digital.  I began shooting about 50/50 film/digital when I got my first digital cameras, first the Olympus E10 and then the Leica Digilux.  With the purchase of the Leica M10, I hope to get back to the 50/50 mix.  I mean, there is a chance that I will never shoot digital again now that I have made my most expensive camera purchase in my photographic life.  I am more intrigued by the look of film now than ever before.  That is just the way I am--pay money for something and never use it.  Hell, this picture was taken with a Voigtlander R camera, the first new rangefinder that had come onto the market for many years back in the 'oughts.  There was the Leica and the Voigtlander which cost virtually nothing.  I bought it because I couldn't afford a Leica, and I loved that little cheap assed camera.  It had screw mount lenses like the really old Leica's and could use those lenses, but the new Voigtlander lenses were so cheap, I bought those instead.  I swear it was the perfect street camera.  It weighed nothing.  The lenses were tiny.  And at the time, people wondered at it.  Then one day after my divorce, I screwed up my courage and lost my mind and bought an M7.  I should never have done that.  I should have shot with that little Voigtlander until the day I died.  Now way has led to way. . . .

There is never any ending to the laments of lost souls.

I have to rush this morning.  An early day at the factory, big events, a public coming out for the new CEO.  I have to be on from morning until late tonight.  Such things make me nervous beyond reason. I must choose my wardrobe for the day.  It is stupid, but the night before a day like this, I am anxious and sleep poorly.

Tomorrow is the same.  Two days of work misery.

Last night, though, I got beautified.  I will look a mess as I always do the day after the beautician gets hold of me.  My hair just doesn't know how to be, doesn't know where it should go.  She chopped a lot off, so I may have a hair helmet today.  Whatever.  Sitting and looking in the mirror for hours last night was torture enough.  Disfigured by time and my own doing.  The mirror is a hideous place.

The new camera arrives today by UPS, but nobody will be there to sign for it.  This is a problem that I don't know how to solve.  How do I get my package?  I am flummoxed.

That is the state of my existence now.  Baffled, bewildered, and bemused.
Posted by cafe selavy at 7:50 AM