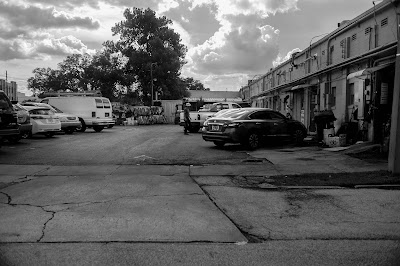 I just like the clouds in this photo.  I don't know when I took the picture nor where.  I've looked at it over and over and wondered about the why of it.  I can't answer any of the questions.  And still, for whatever reason, here it is.  I'm stymied except that I keep taking pictures that are typical, places that are so ordinary we don't even remark them.  They are, I think, the landscapes that will in time make people wonder.  Just the invisible ugliness of our lives.

Up at 3:00, stomach funky, a tiny sore spot in the back of my throat.  What is there to do but take a nerve pill and go back to bed.  Then, at a time I should be getting ready for work, I struggle to get out of bed again.  I take up where I left off last night researching travel to Morocco.  Where it seemed wonderful before, it now sounds dreadful.  Photographs reveal modernized markets that look like the little Islam store down the street.  One out of every one person gets a terrible stomach and the squirts.  Bring your own everything, toilet paper, food.  The call to prayers wakes you early.  Every other day the market is closed for religious purposes.

The only fun story this morning is that Ms. McGowan is selling out Ms. Argento.  Seems McGowan's boyfriend has evidence of Argento sleeping with the boy.  McGown is righteously indignant rather than profoundly sad.  At least in print.

Poor, poor Anthony.  Did he, too, wake in the night caught in a tangle of sheets and bed coverings, shivering at the thought of a diminishing future?  What seemed bright and right now just another bad decision, a poor choice, a marker of regrettable character?

The old world is gone.  I dreamed that last night.  Not long ago, my ex-friend Brando could attract a crowd as an Adventure Guide with tales of travel to exotic lands and sexual adventure.  Really?  Is it possible?  Could any of that be real?  Jesus, they even declared a Brando Day in the big city.  He was given The Key in a public ceremony.

It is shameful.  Generation Fear is absolutely right.


If it feels as though we no longer know how to speak or listen in good faith to one another, it’s because we don’t. This is the kind of controversy that might have seemed overblown as recently as the start of the Obama administration. Today it arrives with frequency and fervor — a marker of the country’s rapidly shifting mores, which are the product of new generations increasingly fluent in, in thrall to and in fear of the hyperspecialized language and norms of academia. Whether you even find the above exchange intelligible reveals a great deal more than merely your political bent, touching on aspects of age, education and geography — not to mention distinctions of race and class.

How did we arrive at this fraught place where the use of nothing more sinister than a body metaphor can assume the power to cause harm? Two timely new books attempt to make sense of the various cultural processes happening on social and in traditional media and, above all, in and around our nation’s (mostly selective, four-year) college campuses. Whether we realize it or not, these processes have radically transformed the ways in which we speak about and to one another and give and take offense, exposing far larger and more significant currents in our national political and social life.

This from a book review in the N.Y. Times.   But I think I agree with the Radically Correct.  I do.  Life should not be full of ups and downs, highs and lows, winners and losers.  Life should be safe, a continuous grand humming of individual sameness, a low, almost imperceptible vibration.

Ohhhmmmmmmm.
Posted by cafe selavy at 9:06 AM