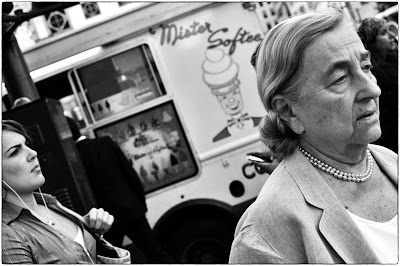 I got up WAY too early this morning, but lying in bed had become torture.  Get a jump on the day, I said to myself (I said), and make it a good one.  An hour later, I am heavy of limb and dull of mind.  I want to crawl back into the sack.  It will be a miserable day by all forecasts.

Feeling ill this weekend, I didn't take any pictures.  I wanted to.  I even tried.  I got on the scooter and drove to "the usual places," but it was crazy hot and nobody was out.  I shot not a frame.  But I developed some film.  Not much success there, either.  The two rolls I shot previous to these were color negatives, so I took them to the lab.  When I got them back, I looked at them and threw them away.  There was not a shot on either of them that I wanted.  Yesterday's bounty was very similar.  As much as I like shooting film, this is getting to be frustrating.  I need something to come of it.

But this is the cycle.  Film failure drives me back to shooting digital where I can chimp away.

For the most part, a bad tummy kept me home and away from anything resembling a story.  A dullard's life, eye's unfocussed, jaw slack.

The sun still has not risen and I have read the papers and spent money online.  What more can I be expected to do?  I will lie down for a moment and see how that feels.  It may feel fine.
Posted by cafe selavy at 6:38 AM