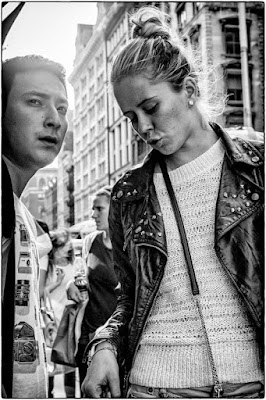 What can I complain about today that would be interesting?  So many complaints, so little time.  My boss's secretary said I was the "mopey type," and I guess that's true.  I moped about yesterday with a bad belly and a lassitude in my limbs which I treated with the proper amounts of alcohol as I lay upon the couch and watched YouTube videos.  I had told my mother that I would come over and make dinner for us, but I had to bail on that.  I just didn't have the old get-up-and-go in me.

But I tried to be productive.  There are lots of art documentaries on the YouTube.  I watched two on Edward Hopper and one on John Singer Sargent.  There were interviews with Hopper and his wife, Jo.  Hopper has been my favorite American painter, an existential hero depicting the emptiness and loneliness of human existence.  Hopper came across like a midwestern farmer, slow of speech, dull in appearance, seemingly irritated by the dour Jo.  Watching them was terrible.  I'm guessing that Hopper learned it was better not to speak in his relationship.  He was never allowed to use anyone but his wife for a female model.  He was lucky enough, I thought.  For the past few years, I was not allowed to use anyone.  Hopper was slow in production making one or two paintings a year.  But his studio. . . how do people do it?  His studio was huge and gorgeous.  It was there that he felt the light and the emptiness and the solitude that went into his gorgeous, hollow, empty paintings.  He was isolated with what I am guessing was a repressed desire.  He learned, perhaps, to suffer his luck.

Sargent, I think, was a larger talent squandered.  He learned to paint and mastered many styles.  But a fellow has to make a living, hence the society portraits.  Thinking back, I realize I haven't finished the doc on him yet.  He was living in London when I passed out.  His gorgeous paintings were being trashed by the English art critics who thought him the worst of the worst for breaking with traditional rules of composition.  There are no Sargent interviews to watch, of course, so I cannot infer anything from his personality which is a shame, for I am very good at judging people.  Insightful, you might say.

I will finish watching that documentary today.

My big complaint is that they don't produce this sort of stuff at the rate I would enjoy.  Television should be like attending the world's greatest lectures.  I think the Emmy Awards are tonight.  Can you imagine if they put the kind of energy into intellect that they put into "entertainment"?  But I'd probably complain.  I would be wanting "South Park" or some other high sucrose treat.

Last night while sitting on the couch watching YouTube, in between taking doses of medicine, I caressed a number of my cameras in a meaningful way.  It is what I remember doing when I had only one camera when I was in college.  I would have it in my hands always, bringing the viewfinder to my eye to constantly frame the world.  I let myself have that pleasure again last night, wearing the finish off the edges of my Leicas that will yield the bronze beneath the black veneer.  I felt the difference in heft between the cameras realizing how heavy my M10 actually is.  But I was connecting and feeling the connection, knowing the contours and mechanics of the camera without looking, memorizing and habituating so that there is never an awkward motion, the camera becoming an extension of my eye and hand.

Rather than feeling oppression and emptiness, I need now feel the freedom and opportunity.

I will try, but you know what they say about me.  I am the mopey type.
Posted by cafe selavy at 7:54 AM