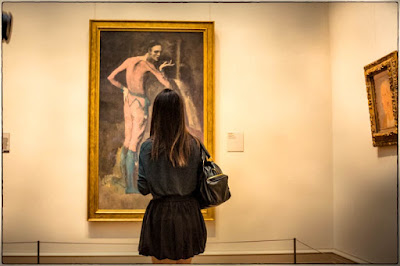 Jesus Christ.  Shit happens.  But why?  And why need it happen to me?  I've been minding my own business, trying to be a good son and a good person, mostly solitary and contemplative, doing yoga alone in my house and reading "The Little Book of Zen" here and there.

It occurred to me last night with great alarm that I had a credit on Delta airlines that had to be used by the middle of THIS MONTH.  I have known it, but things being what they are, the month has simply slipped away while I wasn't looking.  Quickly, I began researching airline tickets on the Delta site.  My credit would get me to NYC and back, but the weather may be shit there as the hurricane makes its way northward after landfall.  I didn't want to take an expensive chance.  So I looked at Chicago.  Wow.  You can't fly to Chicago from my own hometown for under $600.  What's up with that?  Then I thought about Cali.  I haven't been for several years now where I used to go every summer.  There are no non-stop Delta flights to San Francisco--why?--but my voucher would cover most of the cost.  Then I thought about L.A.  Holy moly, tickets there are CHEAP.  I thought about that.  I could fly into L.A. and out of San Fran.  I could spend a week or more driving up the coast with my cameras.  The more I thought about it, the more excited I became.  Remember, I haven't been anywhere for around a decade, or so it seems.  I called my mother to gauge her response.  She was happy for me, it appeared, and she would be o.k. with my going.  I called Q to see what the weather was like out there.  He was a dick and told me that it was California, that it was always beautiful.  I could have gotten that from a travel poster.  Ironically, he told me he would be in New York when I was in Cali, so we would miss one another when I came.

I went online and began planning the places I'd want to go, where I'd want to stop, where I would want to spend the night.  Good old California.  There is something that I have always wanted to do that is crazy for someone of my economic bracket, but I checked it out to see.  The cheapest room I could get at the Beverly Hills Hotel is around $600/night.  Bad.  Sure.  But. . . what sort of man hasn't slept at the Beverly Hills Hotel?  O.K.  Good question.  But alone?

I was undecided, but I knew which way I was leaning.  Fuck it, I thought to myself.  Two nights.

And then it would be all Motel 6's up the coast.

Q disabused me of the idea that I could find anything cheap.  "It's California," he said.

I need some fuck you money.

I pulled up YouTube on my t.v. and started looking at videos of trips from L.A. to San Fran.  And I watched three that gave me a tour of the Beverly Hills Hotel.  I was getting my vibe.  I was getting psyched.

Then the phone rang.  It was an old girlfriend I haven't heard from for a season.  You know how that goes.  I didn't get off the phone until after midnight.  And then I didn't sleep well at all.  My mind, which had been so peaceful and just beginning to find a happy place, was thrown into turmoil.  Pros and cons.

In the morning, I had some texts.  Forget about last night, they said.  Bad idea.

O.K.  I hadn't asked for that in the first place.  And now I am tired and feel on the verge of coming down with something, and where my mind had been focused on a happy road trip, it is trying to piece back together some semblance of how I felt just ten hours ago.

And that is why I say, "God hates me."  Timing is everything in comedy, right?  Timing is everything in sports, too.  Hell, timing is just everything.  In my experience, some things are inevitable.  Like last night.  You go along and think that such knowledge is really only paranoia, but paranoia doesn't make it any less true.  I've been dealing with issues in my life in a healthy way lately.  I am not panicked that my roof leaked again in a terrible storm two nights ago.  It is just something that I have to deal with.  I have to call the roofer and get him to fix it.  There is a rat in the attic, I think, though it sounds like two bobcats screwing.  But I will deal with that without emotion as well.  And I can feel a shit storm of other bad news in the offing.  Like most of us, I'm prescient that way.  But goddamnit, I was having my first happy thoughts in a long time.  And now I'll have to retool.  It isn't fair.  It isn't fair.

I will go to the factory now and grind through the unhappy day.  I will come home too exhausted to do anything let alone find the joyous energy to plan my trip.  I have taxes to do.  I have many house repairs to see to.  God knows what I'll do with my airline voucher now.

I guess that was fate's intention all along.
Posted by cafe selavy at 8:22 AM