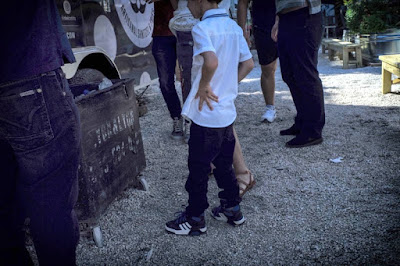 Everything is contextual.  There is no absolute meaning.  You always understand something in relationship to something else.

So I decree; others, however, may have beaten me to it.

So it is with a piece of writing or a piece of art.  I am fascinated by what people see in a little vignette.  Maybe someone will praise the style of a unique phrasing.  Someone else will notice a quirky juxtaposition, and another will commend a proffered idea.  Others, still, will find the writing awkward or pedestrian at best.  It happens to the best writers (the rest of us do not really count).

Most fascinating, though, is what happens to the reception over time.  Take "Lolita," for instance.  What do you do with that now?

I'm speaking of Kavanaugh, too.

Contexts change, but hardly for the young.  They've experienced only one, maybe two.  I now understand why the old and the young are often at odds.  A jejune philosopher once said, "Don't try to describe a Kiss concert if you've never seen one."  That was youth speaking to age.  In time, however, I think the meaning has been reversed.

I can't escape my experience.  It forms the context of what things mean for me.  Had I different experiences. . . .

Speaking for the men of the world. . . .  Yea, that doesn't work.  I watch Orin Hatch and want to puke.  Mitch McConnell.  WTF?  We hate that the right are lockstep on every issue, that they keep winning because of that while the diversity and ass-biting among the left keeps them from winning.

What if women voted lockstep?  They are the largest demographic in the world.  Weird, right?  There is no other single group of voters as mighty.

We would have to hate them as much as we do republicans.

"Speaking for the largest demographic in the world. . . . "

Still, there are the partially educated.  The young, I mean.  In a world of rapidly declining intellect, they seem to have a larger part of the stage.  In large, I blame the Disney Channel where all kids are smarter and wiser than their befuddled parents.  And of course, we, of the left, adore them.  We are free range.  We want them to explore.  We value their opinions and don't want to stifle their expression whereas the right send them to religious and political camps to be indoctrinated.

Wow.  What the fuck happened, dad?  Were you really a monster?

Michael Moore, the only lefty other than myself to predict the Trump win, says Trump will be a two term president.  I think he's probably right.  On the left, so many voices, so many contexts.  On the right, now so much.

Polemic stifles creativity, but it sparks it, too.  What emerges?  As Frost said, "Everything comes to market."

Bourdain ranks higher in my esteem all the time.  He knew what he was.  He knew when to throw in the towel.  Some train wrecks are just too bad to look at.
Posted by cafe selavy at 7:31 AM