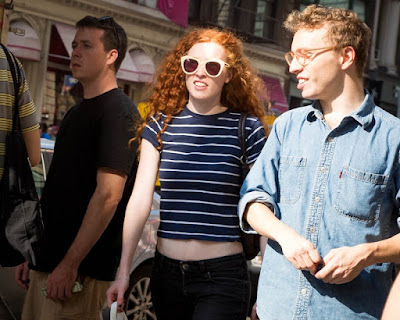 I don't want this site to become just black and white.  I'm trying to post color on alternate days.  I like color.  It is what we see and it is pretty.  But the graphical qualities of b&w are sometimes just overwhelming and I can't resist.  This woman's hair color, for instance, against the milkiness of her skin is stunning.  It is nice to be able to render that.  Still, I am going to post the black and white version of this, too, and let you try to decide.  Sometimes I think that if I want black and white pictures, I should shoot in monochrome only, but then again, it is nice to be able to decide after the fact.  When I have only black and white film cameras with me, I see things that call for color rendering, and I am regretful.

I want to live without regret.

I went to a monthly birthday celebration with some of the cool kids from the factory last night.  I don't like doing group things.  It is truly stressful for me.  The entire group dynamic energy has worn on me since I was a kid.  I was always the mopey one sitting in another room watching the party.  There always seemed a politics at play, an aggressive energy that wore on me.  I didn't mind watching, I just wanted to be ignored.  But the group from the factory are really a nice lot, most of the time, and I usually feel at ease with them soon enough.  From time to time, though, just when I think we are getting to that level of weirdness that I truly enjoy, I'll say something that seems to dismay EVERYONE, and I don't go back again for a long, long time.

Last night, I got reports about one of my ex-girlfriend's behavior since we have split that I didn't want.  But I got it anyway.  It makes me uncomfortable to hear her/my life talked about in public, but there it is.  About her behavior, they were not approving.  But that is what always happens after a breakup, isn't it?  People are finally free to say what they thought all along.  "You know, I never liked the way. . . ."  I do it, too.

I thought about what I was told on my drive home.  Maybe it was good for me to hear.  I don't care as much any more.  I am ready to be excited about taking a trip.

But it is hard to be happy when you know people's lives are being turned inside out by a hurricane.  I am all empathy having been financially ruined by one.  Those who have not, no matter what, never have enough sympathy.  It is normal and natural that they don't want to think about your misery too long.  "It's terrible, but at least you are alive.  You'll be fine."  What else are they to do?  I can't sit and watch the coverage of the carnage.  It is all too real to me.  Too many people's lives will never be the same.  It isn't about deaths; it is about destruction.

Today is another long day at the factory.  I should go have dinner with my mother tonight, but I know I am going to be exhausted and just want to come home, pour a drink, sit on the couch, and fall asleep.  I already feel guilty.  Maybe I can rally this afternoon and go over and watch t.v. with her.

But god, sometimes I just want to be alone.  More than sometimes.  Like most people, I guess, I don't want to be alone when I have to be, but when I can choose it, I most often do.  What is the term for living too much in your own head, for having conversations with yourself?  I should know this, but all I can think of is solipsism.  That isn't the term I'm searching for.  It is some combination of solipsism and nihilism.  What is it?  It is literary.  Shit.  Whatever.

Here is the black and white version.  It has it's own charm.  Charm.  That is the wrong word, too.  Maybe I should try talking to others more. 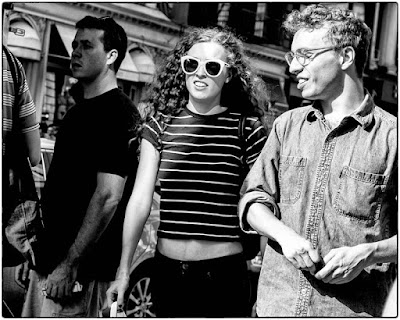