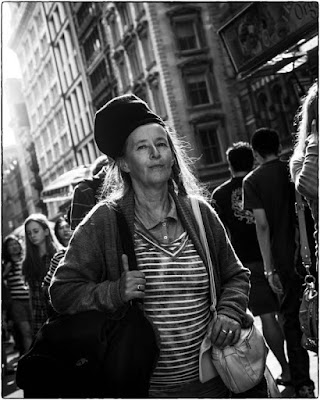 We love places that are stuck in time.  Those are the places we like to go.  NYC is a visual feast.  So is Paris.  So is London.  And the people don't look like the people "back home."  I used to go to Key West back in the mythical "day" when it had a culture that was not based on tourism.  It had its own look, and I adopted it.  And I would bring that look with me "back home."  It did not fly.  You can get tired of people smirking at you.  The same goes for big cities.  Try that New York look "back home."  You'll end up wearing your mall clothes soon enough.

We really like countries that have been trapped in amber.  Cuba, for instance.  Oh man, everyone loves to go to Cuba to see the old cars, the crumbling luxury of the stately buildings.  And there are those of us whose hearts race to get a chance to see some jungle dweller just "discovered," having been closed off from the historical march to modernity.  We want to look at them and "save" them.  We want to "protect" their culture.  We don't want them to lose their traditional ways of making tools and clothing.  We are intrigued.

We feel cheated when we pay a lot of money to go to Kenya to see the Masai only to find they went to college in London and are wearing Rolex watches with their "traditional" clothing.  We hate going to Bali and seeing kids wearing Mickey Mouse t-shirts.  We certainly don't want a Walmart moving in.  It would spoil "the view."

I am guilty.  I don't care.  I know that villagers in Central America crave the Walmart.  And I am not one to say they are better off without one, that this homogenizing of the world has made us dull.  Well.  I do say that.  But I know that they want the Walmart and I want to preserve pieces of the world in amber so that I can go and look at them. Sorry.  I love the "exotic."

That is why we liked Anthony Bourdain's shows.  He went to see people who were stuck.  CNN celebrates him as a Nobel prize type who had concern for the people of the world.  But he was having fun.  He went to socialize with "the other."  Wrap it up as you will.  He was like all the British colonizers of the 19th century who were running away from a culture that repressed them.  The world was colonized by "sexual deviants" seeking their opium dreams.

That is the currency of postmodernism.

I want to visit the pockets of the world where some reminders of the past can still charge me.  I want to be Oriented.  I want to see things and do things I can't do at home.

So much of it for me, really, is purely visual.  I live in the amalgamation of all your worst nightmares.  I live in the test market for chain stores, the roads lined with every imaginable restaurant you can see anywhere but never in such abundance.  That is why I want to go to places like the Ozarks.  Say hello.  I want to come see you backward fucks in Appalachia, too.  Don't get pissed.  I'm calling out to my relatives.

You can still have real adventures in the U.S. if you have the nerve.  Take a trip into the Louisiana bayou, if you dare.  Rent an airboat and ask directions to that houseboat cafe up river on a Saturday night.   I haven't had the courage so far.

I do love the glamor and the contrast of Manhattan.  I want to see the New Bohemia in Detroit before it is homogenized, too.  When people tell you they "love Seattle," what is it they are speaking of?

I'm living "back home."  It is a fine place to get away from with easy access to cheap airfare.  But staying here without going somewhere "exotic" too long is like sitting in white room listening to Abba.  I've gotta gotta go.

Yesterday, I felt that someone was going to tap me on the shoulder, smile at me, and introduce herself.  I could almost see her, but her face was a silhouette, the sun directly behind her.  It gave her a halo.  It gave her a glow.

Really, I am feeling like someone who got trapped in amber--at the mall--stuck there eternally.  Can you imagine my future embarrassment?

I'll book a trip this weekend.  And when I do, you'll be the first to know.
Posted by cafe selavy at 7:49 AM