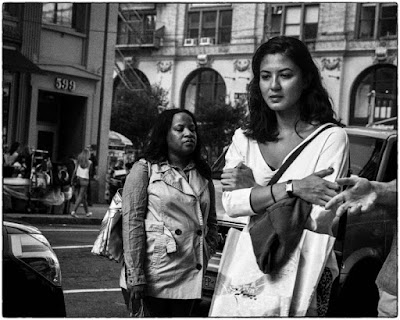 I've worked like the devil on processing photographs from old hard drives that have never seen the light of day.  I get excited by an image and think, "I can make that pop," then work on it as the music carries me along.  It is not quick or easy.  I may work on an image for a very long time, maybe an hour.  Then, finally, I move to the next one, then the next one.  And after some time, I will go back and look at the images I have made, and then. . . . They are not all good.  And after working on some, I realize that what I did did not work and that I'll need to start over and do it again.  But I learn each time, even from the pictures that don't work.  It takes intense, concentrated, and extended effort to get a work flow that gives you satisfaction.  I'm still somewhat random and experimenting, but last night, I think I found a breakthrough for color images. I think that, but I haven't gone back to look at them this morning.  It is too dark.  The night still surrounds me.  I will wait for the sun to chase the demons away.

I woke up too early.  I woke up unhappy.

For two of the three days of this long weekend, I was ecstatic to be back in my own house able to spend my time doing what I wanted and when I wanted.  I drank too much and tried to figure out gummies and stumbled off to bed to fall into a coma.  By Monday, though, my body had had it.  I was moving in bubble gum.  I skipped the gym and took a long walk.  I worked on pictures and went to the grocery store to get fixin's for lunch with my mother, our traditional hot dog and hamburger Labor Day Feast.  I fixed the late lunch then fell asleep on her couch.  I'd only drunk half a bottle of wine, but I felt terrible and took a handful of ibuprofen.  In the early evening, I gathered up some my things that are still at her house to take home.  I could feel the sadness, her loss of companionship, the guilt.  I'd spent half the day with her, but now the darkness was coming and she would be alone.  Jesus Christ, I thought, in her own house with her own things.  How much life am I expected to give up?

Babies cry all the time.  They are mostly not happy about things.  We should never, ever forget that.

In the darkness, I try to go back to sleep, but I start thinking.  Ili made a clean break.  Her life starts over fresh and new.  Since coming back home, I live in a museum.  Neighbors say, "We haven't seen you two around for awhile."  One called her my wife.  I open the cabinet and there are things she bought, teas she drank, ingredients for a breakfast bread she used to make me.  I lay in the darkness and think about the good parts.  Knowing nothing good can come of this, I get up.

The start of a new day.

Last night, after working on my own pictures for days, I looked at the big Garry Winogrand book I bought and saw the similarities and the differences to and from what I have been working on.  I see things I hadn't noticed before.  I see where he was random and where he was more composed.  I see the ones that are a compromise.  "If only," he must have thought.  I see the photographs that were made from overexposed negatives and the ones where the exposure was right on.  Some images were too good to let go.

Then I got up and went back to look at mine.  I cull more of mine from the herd.  In the end, after working for three days, I will end up with a couple that will work for me in the future.  That's weeks of shooting and many, many days of editing.  A couple. . . maybe.

Oh, I will show you more for sure.  You can't show a picture a day without showing most of them.  But in the end, you know. . . a couple, maybe.

I keep looking at other photographers, anywhere I can see their works, on YouTube, on Facebook, on Instagram.  I get intimidated and depressed.  There are so many and they are all good.  For a moment.  Then, I realize, it is like the mania as I work on my own images and think I have a treasure trove, and I work to make them pop.  And then, fewer, then fewer still.  And I go back to those other photographers and think, yea, that looks good, but wait, it will end up on the cutting room floor.

What lasts?  The longer you look and contemplate, the more you know to look for, the more you cut and discard.  In the end, there are only a handful left.

This morning, I am hoping to have a handful.
Posted by cafe selavy at 7:12 AM