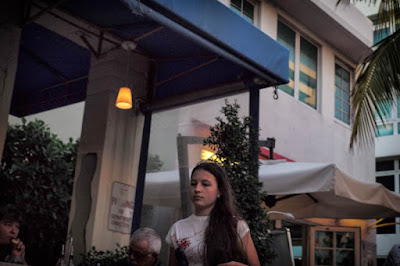 I think I have made the transition back into my own home.  Spent the last three nights here.  I like it.  Yesterday's rain kept me inside, and that was alright.  I spent the day working on old photographs that have been sitting untouched on hard drives for years.  I put on music and worked like I used to, experimenting a little, developing new ways to get a "look."  I know it sounds like a drag, but it was/is really fun.  It's all driven by the music, I think.  Without the music, it could be a drag, but I find some romantic place in me full of melancholy rather than sadness, and that drives the process.  I hope my pictures are touched with melancholia.

I have plenty of "new" photographs for the blog now, enough, I think, to balance between black and white and color.  That is what I like to do.  That is fun

Just checked the weather for today.  Looks as if it will rain all week.  It is tropical storm season here now.  Gray skies and light anxiety.

Not me.  I was prepared to give up drinking, but I have been in my own house and have not.  A beer, a glass of wine, some whiskey, and trying to figure out the whole gummy thing.  Three nights at home staggering to my own bed and dropping off like an anchor.  Waking in the morning with anticipation and aspiration.  Who knows now what great and wonderful things I might fail at?  Hey, failing is trying, and it is good just to be at the table again.

But, yes, I need to quit drinking.  And now, back in my own house, it might be that I can get out at night for a yoga class or maybe a dance class or something.  My flexibility is shot.  I want to become Gumby, dammit.

That is a report.  You can't get many stories staying in the house alone.  You do things and report, or you read things and opine.  The conflicts are internal, but they are the same ones you wrote about before.  And if you don't write about conflict, the best you can do is write lyrically.  But if you don't do that, you simply give the old emotional weather report and hope that people can go, "Yea, I've done that," or "I felt like that.  Ha-ha, I've stumbled to bed plenty of times and thought the next morning, 'Hey, I've got to stop this.'"

But the big boys and girls are working.  They have a vision that drives them and they never waiver; they just keep plowing ahead.  And then they become Alec Soth (link).

Or they don't.  They just keep doing what they are doing obsessively without success, and then they die.  We don't hear about them so much.  Not much at all.  We just know that they are weird and dour characters to be avoided at cocktail parties as much as possible.

There are things I need to do today that I don't think I'll do because I am terrible at doing what I don't want to do.  I'll put them off until the very last moment, or I will wait until it is too late to do what could have saved me money and time if I had done them when I should have.  I know this.  But I will rationalize that I deserve to do the other thing, the thing I want to do which is generally not to do the thing that needs to be done.  Life in the Panic Room.

Remembering something, I will leave you with this (link).  It is a thing that I enjoy.
Posted by cafe selavy at 7:43 AM