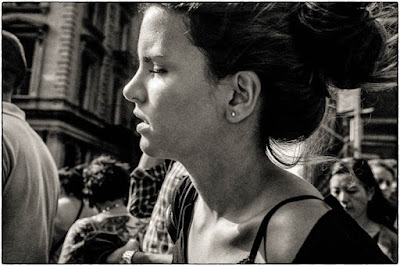 Random faces in a crowd.

"Why would you want to do that?"

How does one explain?

"Why did Cezanne paint random pieces of fruit?"

Not saying this is like a Cezanne, but it was all I could think of.

I should have stayed home yesterday, but I didn't.  I sat through a two hour meeting in a small conference room with my guts sounding like a bowling alley on Saturday night.  It was pretty embarrassing.  I haven't eaten much.  Skipped lunch and had soup for dinner, but things are still going on.  Bacteria or virus?  Maybe I ate bad tuna at the sushi restaurant and nematodes are killing me now.  I tried the whiskey prevention, but maybe they've evolved.  Evolution happens more quickly in small things.

I've been in my own bed for six nights now, and the reality has come to me especially when I wake up in the night.  I have to get a social life again.  I used to have the studio.  Jesus, it sustained me.  I was happy.  I could go there and work or sit and think or go out back and talk to Jeff the Artist.  I could walk to about six great bars and restaurants.  No, more than that.  I gave it up when I met a girl.  That looks like a terrible decision now.  The studio was a life saver.  Now, my only refuge is a camera and a computer.  That is not enough.  I need space to work, space to store, space to think.  I had the studio for about six years.  It was more than a luxury.  Right now it seems a necessity.

As does travel.  I will book some trips.  I watched an old film reel on tourism in New Jersey last night.  It was probably shot in the early 1960s.  It was funny, but the images of all the New Jersey beach towns and odd tourist spots gave me an itch.  I've never been.  A week rambling through N.J. would be awfully fun, especially knowing NYC is there for the taking.  I'm thinking about it.  And Detroit.  And Nashville.

And of course, Amsterdam and Paris.

I watched a couple of travel docs on Morocco last night, too.  I'm 50/50 on it.  Too much bright modernity making the old markets and alleyways look faked.  But maybe I shouldn't watch Morocco on a bad stomach.  My neighbors went and had the shits the entire time.  I looked at the market food in those films with great suspicion.

Sponsor?  Anyone want to be a sponsor?

Oh, and Berlin.  There are great photographers in both Nashville and Berlin I would like to see.  They can give me the insider's guide.

Today, though, will just be home.  I'll watch more travel docs, maybe.  And sleep, if the neighbor's house alarm which came on about five minutes ago ever goes off.

I look at my street pics and wonder at how close I get.  Looking at Winogrand, I think I should not get so close.  But who does?

I will think about this before I go to Jersey.
Posted by cafe selavy at 7:55 AM