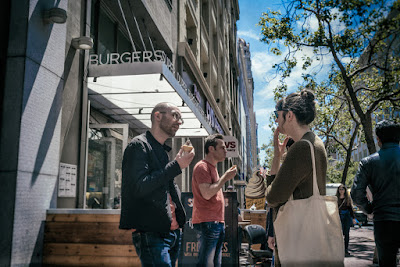 The older I get, the more life gets in the way of what I am doing or what I want to do.  Not that the four of you noticed, but I was away for a couple of days.  Life crisis.  You know.

It seems to have all worked out.

So what do I do, go on with the S.F. narrative?  I've lost momentum.  Somehow it seems silly.  I'll be brief and leave out all the sordid details.  We woke up and had coffee, then headed off to the SFMoMA.  Warhol.  Lots of it.  We already knew most of the information on the walls, knew more, so we were able to cut to the chase and just look at the art.  Impressive.  Warhol nailed it, whatever that was.  But he hit it right on the top of the goddamned head.  He had ideas.  He was good.  And like all good artists, he kept evolving.

He just didn't have all the ideas that Warhol had.

On the way to the museum, I saw a guy with a Leica taking pictures in the street, a guy maybe my age, short-ish, round.  He saw my Leica and we started talking.  As we did, he whipped his camera to his eye for the briefest of seconds and snapped a photo of a passing woman.  You would barely know he had done it.  Perfect.

Inside the museum, I saw him again.  He introduced me to some other fellows, one with a Leica, too. I mentioned the photo snapped in the street and said, "He's as quick as Winnogrand."  He even shot with a 28mm lens.

"For what its worth, I met Winnogrand once," he said, and I wondered if maybe I should know him.

After MoMA, we took the train out to the Mission District.  When we got off the train, we were on top of the hill that rolls down to the park.  There were people lolling about everywhere.  I saw some tents.  As we descended, it was clear that we were at the staging ground for a Pride parade.  This was not like the ones back home.

I thought I knew my way around, but after a few moments, I was feeling rather lost.  Ili picked out a pizza restaurant that used some special, magical ingredients, so we got a sidewalk table and some wine.  The day was crystal clear and gorgeous.  The Mission is sort of like the Brooklyn of NYC, I think, less busy, minus tall buildings, relaxed.  We walked the streets and perused the shops.  Why oh why isn't every city like this.  No chains stores.  Everything somehow new.

We came to a shop that sold animal heads and bones and insects and relics, something fun to stumble across as was Evolution in SoHo so many years ago.  There is still magic in the world.  It is just disappearing at an exponential rate.

But here I sit on a Sunday looking at a computer screen.  I need to go out and have something to eat and drink.  Yesterday that was gazpacho and ceviche and sangria.  It was good.  It was fun.

What am I waiting for?
Posted by cafe selavy at 1:26 PM