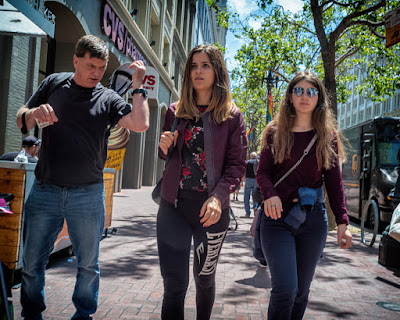 After lunch, we walked to North Beach up hills through the neighborhoods, past small grocers and bars and cafes, and I realized what shape I was in.  Apparently, I still have a way to go before my recovery, especially of the lung that had collapsed in the accident, is over.  But, I thought, this walking hills is especially good.  I was glad I had passed on going to Yosemite this year.  Next, I said.  I will be ready then.

We entered North Beach from the top near Coit Tower.

"What do you want to do?  Would you like some coffee?  I can take you to a famous old place where all the Beat writers used to go."

We headed down the hill to the Caffe Trieste on Vallejo St. The joint was crowded and beat as ever.  And. . . it was not for Ili.  She turned around quickly.

I was disappointed, but my history is not hers, so. . . O.K.  We continued down the hill until we spied City Lights Books.

"Now there's the place," I said, going into a speed rap about the history and importance of the bookstore.  "Ferlinghetti just turned 100 and published a new book."

Somehow, it seems, a life of drugs and liquor and late nights is good for you.  Maybe.

She, however, was looking at Vesuvio Cafe next door. 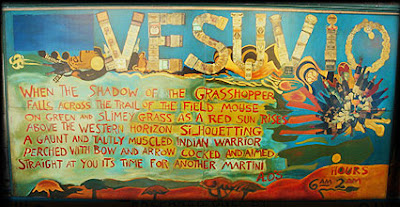 "Let's go in there first," she said, and not wanting to be a spoil sport, I agreed.  It was early, so the place was rather empty.  We ordered some sort of specialty champagne drink and took a table.  A couple of regulars asked the bartender to put the t.v. on for the women's soccer match, USA vs Somebody.  The fellow at the table next to us sat with a chess set in front of him.  Occasionally he would make a move.  He sipped coffee and stared at the board.  The place was pleasant, so we ordered again.  It was a lot easier than walking.

When we had finished, we stepped across Jack Kerouac Alley and into City Lights.  It is still a good bookstore, even more so since there is barely anything to compare to it now.  The place was crowded, of course, but it was ok.  I already had most of the books.  I took Ili up to the Beat library upstairs.  I pointed to things and whispered, but she didn't grow up with this as I had.  She found a book and a chair and sat down while I browsed.  I found a Kerouac section and was surprised at how many titles were unknown to me.  I picked up "Good Blonde and Others," a collection of writings I had never seen, a hodgepodge of stories, essays, and criticism that I'd never seen.  It didn't look like his best writing, so I bought it.  I thought it might cheer me up to read some not so wonderful things by a good writer.  It might inspire me.

Exiting City Lights, we headed back uphill to Chinatown.

"Remember the movie?" I asked.  We had watched it together a few months back.  "This is it."

We turned down Grant St. and wandered in and out of stores full of ceramics, silk, and jade.  Ili ended up with three jade bracelets before we came to a dim sum restaurant.  What the hell.  We slipped in and got some dumplings.  They were good, so we got some more.  Beer and and tea, a San Francisco treat.

"Really?  You too?"  Mine was already cramping.

"I think we had better head back to the hotel."

We laughed tight cheeked back to the Hilton.  By the time we reached the hotel, though, we were fine-ish.

It had been a good day.  We would need dinner soon.  But first, we needed a break.
Posted by cafe selavy at 12:41 PM