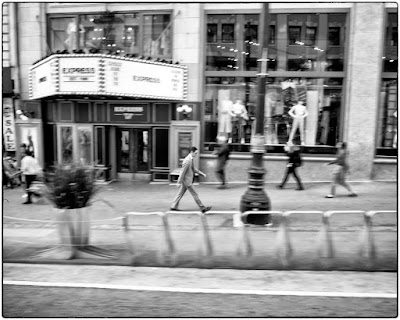 Day 2 began with coffee and showers.  We slept late, of course, then sat on our balcony overlooking the city, eager, but in no hurry.  We had days.  We wanted languor.  Excitement, however, overtook us, so we grabbed our things, in my case the camera bag, and stepped into the street.

Immediately, I put a Leica to my eye.  I saw a woman picking through the garbage can next to the hotel.  And then, like a sudden bolt of lightening, like rapturous thunder, a woman was screaming at me, not the one I photographed but a stranger walking up the sidewalk.

"You can't do that.  You have to get permission."

It wasn't that polite.  She was angry and aggressive and charging toward me like a Pamplona bull.

"I am a cop," she yelled, pulling out some sort of laminated cardboard i.d.

"Then you should know better."

Ili was not happy and pulled me away.  Breakfast did not go well.  It had just begun, and I was already ruining her vacation.

It is impossible to photograph when you should be vacationing with someone.  She was right, of course.  I needed to be in the streets alone, looking, seeing.  Still. . . I was in the city.

After breakfast, we strolled up to the cable cars on Mission.  There was barely a line.  We were early, I guess, being on East Coast time.  Ili was excited to ride a cable car, so we were getting happy again.  As we stood in line, a big homeless guy wearing a blanket like a cape stepped up to her.  He wanted money.  I wanted to see how this would go.

"I can't, dude."  He stood there, a warm sneer plastering his mug.  And as I say, he was big.  He asked again, and again she demurred, but he didn't go away.

"Can I take your picture?" she asked.

"No," he said defiantly.  I decided to chime in.

A bit later, he was in a shouting match with a security guard who was trying to move him away from the crowd.

"Fuck you.  You ain't no fucking cop.  Kiss my ass you motherfucker!"

But eventually he moved on.

And that's how the day began.  Inauspiciously.

But Ili love riding the cable car and the conductor let us stand on the back platform from which we snapped photographs like the one above.  The cable car swept up the steep hills and when it crested, Ili could see the bay.  It fairly takes one's breath away.  The sun was out.  The sky was blue.  The air was clear.  I was still worried, but I had my fingers crossed.