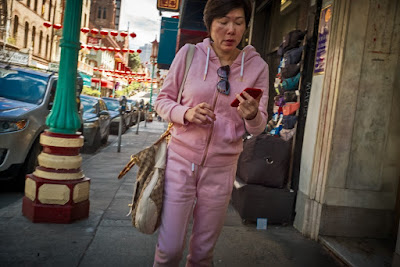 At the end of the cable car tracks, we set off down the hill toward Fisherman's Wharf.  It was the best way to start an S.F. trip, I thought, doing the most touristy thing first.  But as I said, we were early. There were hardly any people around.

"It's strange," I said.  "I haven't seen it this empty since I was here in 1975."  Then fisherman sold there catch off the boats.  Otherwise, it really wasn't a destination.

I walked her past the boathouse and to the beach where a chill wind was blowing off the water.  The usual swimmers in full wet suits were swimming laps in the roped off area.  In the background was the bridge, red, iconic, beautiful.

And then. . . there was a group of about 30 kids with a couple chaperones.  The kids were all stripping down, naked as birth, and putting on little bathing suits, chaperones helping those who needed it.  Ili and I looked at each other.  WTF?  Apparently, they were getting ready to swim.  Could it be?  Naked kids on a cold beach readying to enter the frigid water.  Sure, San Fran is different, but somehow, from every angle--practical, legal, ethical--this looked perilous.

Well, we weren't in Kansas anymore.

Though we had just eaten, Ili was anxious for some chowder and sourdough bread, and by now it was 11:00, so. . . what the hell.  But there were sooooo many chowder places, and Ili could only have one, so she stopped to ask the handsome boys on the dock working the tour ships where she should eat.  The Blue Mermaid, they said.

And so it was.  And it was good.  We sat outside eating our second meal in two or three hours, glasses of wine, the smell of legal weed wafting across the patio, sun shining, the day before us.

It sure beat working.