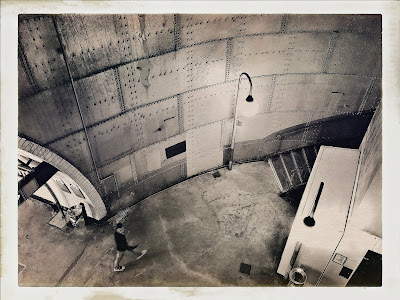 It was what Ili called our "Cafe Day."  We began with breakfast at Cafe Flore, famous as a bohemian haunt. We were lucky to get there early as we were able to walk in and get a table. In just a few minutes, a line formed and it was impossible to get in. We ordered omelets and coffee and orange juice, and all of it was good. We sat next to some poor woman from Chicago who looked worn down. She picked a conversation with Juli and told a sad tale of her Paris hardships. She talked to the people on the other side of her as well, a strange looking trio who answered her questions amiably. She was lonely. On the other side of us sat “a blogger model,” an Italian woman who posed for portraits taken by her Brit friend dressed in a tight fitting fashion suit semi-hipster style. They didn’t know how to work her camera, though, and she kept complaining to him about the pictures. They were both dressed to the nines, but she was rather mousy.  Ili said this is what people do now. They go to “Instagramable” places and make photographs. Later that evening, we would see another one sitting on the bridge on the street with her Channel bag in front of her, an instantly Instagrmable post.

We left the cafe and walked to the Luxembourg Gardens, but we had to stop at another cafe for mimosas so I could poop. It was a worthwhile stop, I assured Ili. My belly was still acting silly.  We got a bit lost on the way, but every street was interesting, so it was not a problem simply to wander and to gaze. We found the entrance to the gardens and strolled along, finding our way to the big fountain in front of the old palace. We stayed only briefly, though, for how long can you look at a cement pond, and continued on to the Cafe de Lillas where Hemingway used to write and meet with F. Scott Fitzgerald. It was pricey and we did not go in. We ambled on to the Catacombs where the line was about half a mile long. We stopped in some museum/exhibition about the Liberation of Paris so that we could use the bathroom, then headed to the Cafe Select for a fabulous goat cheese salad and drinks. We sat on the sidewalk overlooking Le Dome and could see La Coupole as well.

From there, we took the M4 back to the Right Bank so that Ili could buy these fabulous little cakes we had a few days earlier. As we strolled, Ili shopped and I took photos. When we arrived at the bakery, however, there was a line just shy of being as long as the one at the Catacombs. Apparently, this place was famous, too. Ili stood in line and I wandered a bit feeling what it would be like to come to Paris alone. When I came back, Ili was inside. She bought many cakes. We had packages to carry.

Heading home, just at the bridge back to the Island, there was a HUGE parade going by. It was a tech music parade, very weird, and I grabbed my camera and Ili let me have ten or so minute to make pictures. The crowd was young and funny. At one point, one of the big floats or trailers or whatever stopped and everyone started and singing and jumping up and down to some song. It all seemed joyful, and when I came back to where Ili stood, I was laughing and singing. She told me I had the words wrong. She knew the song. It was by Katy Perry and had been remixed to a techno beat.

We made our way back to the Ille St. Louis and Ili did some more shopping. She bought a couple sweaters, some pants, and a scarf. Then we did some marketing and bought things for dinner—tortellini, sauce piquant, a baguette, and some chocolates. The difference between a hotel room and an apartment.

I was struggling by this time, my left knee and right hip done for, my lower back just mush. When we got back to the apartment, I poured a scotch and sunk into the couch while Ili made dinner. She boiled the tortollini and heated the sauce and prepared the goat cheese and ham salad from the night before. It was perfect. We ate that and had wine and talked about our day.
Posted by cafe selavy at 8:20 AM