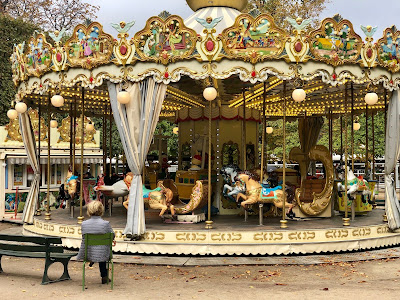 Sunday was a rainy day in Paris with a long morning of coffee and pastries and slow conversation.  We knew it was a museum day, and we knew it would be so for everyone, but what can you do.  We took the metro to the Louvre.  We had booked tickets for entry that would let us skip the line, and so we sauntered up to the "special" entrance like a couple of BoBos on vacation.  The line we were in, however, was not the line we were supposed to be in, and the nice man in a uniform told us we had to go to the Pyramid entrance. . . blah, blah, blah.  And then he turned to answer questions from someone else.  Ili was ready to turn back, but my bad old kid training from growing up in a bad old place had me pull her on and into the museum this special way we were not supposed to go.

And we were in.

We walked the corridors of the vast old museum that was one a palace and then an abandoned edifice where gypsies and prostitutes camped under the ornate colonnades and in the courtyards.  What is there to tell about a museum, really.  We saw ancient artifacts that turned out to be replicas or partial artifacts rebuilt.  We saw the early European paintings but mostly enjoyed the works from the Byzantine era.  There was a mile long line to get in to see the famous Mona Lisa, so we decided to cut out for some lunch and a tour of the Gare d'Orsay.  Leaving the Louvre behind, I knew it was not my favorite museum by any stretch.

The Orsay may be one of them.  But it was Sunday and rainy and even the special pass that lets you skip the general line was an hour's wait.

We would miss seeing the Gare d'Orsay.

We went across the street to a cafe and sat under the awning with the heaters blaring.  The wet streets of Paris and the umbrellas and raincoats look wonderful from a dry perch with glasses of wine and baskets of bread and cheese and a big bowl of beef bourguignon.  The bourguignon became a hit with everyone who came to sit after us.

Yes, they were all Americans.  I don't mind Americans the way others seem to, considering them a plague of locusts on the natural scene.  I know what they mean, but I don't mind so much.  Paris is, in many ways, a giant theme park sustained by tourist dollars.  You don't go to Paris to get away from tourists.  For that, El Salvador is a great bet, or maybe Nicaragua.  But Paris is now thoroughly Americanized.  Everyone seems to speak English now, and they are nice about it, too.  They used to speak it but not to tourists, or if they did, it was with a demeaning snarl, but now, they smile and say, "Of course," and as I've said, I feel myself a dolt for being so mono-lingual.  I would try to cobble together some French but the words never sounded right and were always half in Spanish.

But the tables around us filled with beef bourguignon on a cold and rainy Paris Sunday.

But no, I exaggerate. Not everyone was American, truly.  They just all spoke English.  The couple next to us and the first to order the beef stew after smelling mine were from Italy.  Then there were some Brits, and then a table of four elderly Americans.  And everyone ordered the stew.  The waitress complimented me on my choice.

And then there were some French women two tables down.  One of them seemed to be the focus and the other two primped her, then one of them, a pretty French Asian, took out a camera and began taking pictures of the woman who was posing as if for magazine ads.

"Another instagram-famous 'model'," said Ili, and we watched with great but subdued mirth.

"Funny.  It is going to say 'Pasta and Pizza' behind her."

And sure enough, it did.  The next day, Ili saw her instagram feed on the Paris fashion page.  Remember, it was Fashion Week in Paris, so this was happening all around the town. 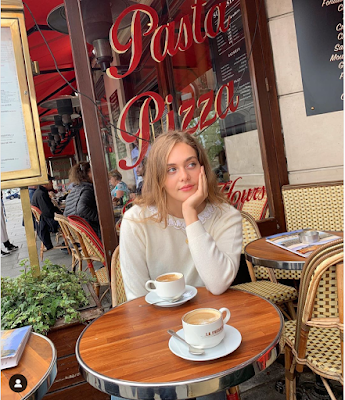 So I exaggerate.  It is not all Americans filling the cafes.  It only takes a few to make it seem so.
Posted by cafe selavy at 7:44 AM