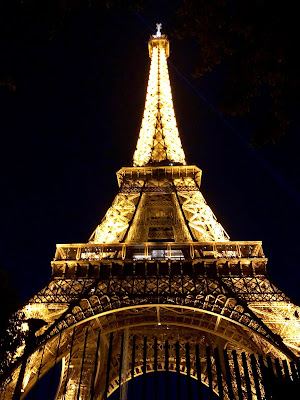 And then. . . the disaster. We decided to take the metro to the Eiffel Tower that night.  Easy. We crossed the bridge and got onto the M1. The only problem was that it was the wrong M1. There is one on the left and one on the right bank. We stumbled around for an hour looking for the correct station, and the blame began to fly. I took her one way, she took me another. In the end, defeated and beaten, we found a cab and took it. He ripped us off ($25), but at that point, I didn’t care.

He let us off at the base of the tower. It was enormous, and it was lit. A cold wind was blowing, and it was Sunday night.  Still, there were crowds mingling all about. We wandered a bit looking for an entrance, wondering how much money it would cost us to get in.

We passed through a security check to the park inside where we read that the tower was closed for the night at the higher levels due to high winds.  That was O.K. with Ili as she didn’t want to get into an open elevator anyway.  We wandered around a bit looking at the metal structures and the junk shops, and in a very short while, we decided to go.

We were hungry and it was late, but the restaurant that Ili had wanted to go to was at least 15 minutes away. We hemmed and hawed and went to a cafe across the street to figure things out. We sat at a crummy table and ordered drinks. A sullen waiter brought what was the worst glass of wine I have ever had to the grimy table. It had taken far too long to get here.  We had walked all day and made mistakes all night.  Sullen, perhaps defeated, we decided to look for the metro back to our little home.

We walked in the direction of the metro station that Google gave us. We mapped it and walked by it and decided it was further up and walked some more. Up to an overpass where trains were running, back to a subway hole that had nothing to do with our metro (or so we thought).  Eventually, we decided that we were to take the C train. We boarded, happy, as it had the Notre Dame listed as one of its stops. But at the Gare d’Orsay, we were told that we were at the last stop. Ejected, we had no idea where to go. We quarreled with one another over maps and directions, a classic battle, and then asked an information person for help. She told us that the C was closed and we would need to take two metro trains to get home. We walked up stairs, through tunnels, down stairs and through more tunnels but finally we came to the metro platform with the correct letter and number.  Then a couple stops and we got off to make a connection.   Then another three stops, but when we got up to leave, the door would not open. We ran anxiously to another door, but we were too late.

We got off at the next stop.

We tried to laugh it off and did a pretty good job, but we were beat and tired and just wanted to get home. Too tired for a cafe, too tired to cook, we warmed left over pasta, ate cheese and bread and drank wine and whiskey and watched a Netflix comedy special starting Norm McDonald.

It was one when we went to bed.

Later that night, I woke up choking on vomit that I had tried to keep down in my sleep. It had gone into my esophagus and windpipe and it was pure HCl and was burning the heck out of my lungs and throat. I coughed until I puked.

The next morning, Juli said it was probably the blue cheese. She had not eaten any because it tasted funny to her.

She was probably right.
Posted by cafe selavy at 7:35 AM