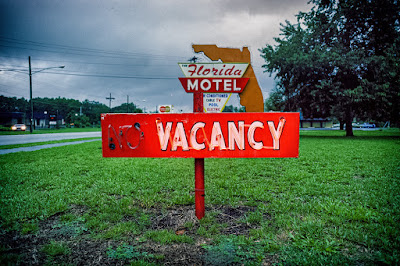 Going through my mess of old photos, I found a treasure--two rolls of color slide film that I shot for a photo class in 1978.  I didn't think I had them any longer, and when I opened the box, they stunned me.  They are unlike any of my other photos from that time.  It was an experiment, really.  They seem to fall somewhere between William Eggleston, who hadn't been noticed until his MoMA show in 1976, Stephen Shore, who was about to get a Guggenheim, and Fred Herzog, who nobody would hear of for decades.  Throwing the slides onto the light table, I was thrilled and despondent at the same time.  Why hadn't I done more of this?  Why?

In 1978, I had returned to the university to do graduate work in anthropology (that's another long story).  I had been gone for three years except for occasional weekend trips to see my girlfriend.  Life was changing.  Hippie times were rapidly fading and the world looked shabby.  In 1975, I traveled around the country and had shot some of the best photos I would ever take.  After that trip, though, I had moved back to the town where I'd grown up, had gotten a job, and had begun to read obsessively.  But I still tried to photograph.  It was difficult.  The university town had been easy.  Traveling with a camera had been a breeze.  But now I was living in a town where discos and malls were the main entertainment.  I photographed my childhood friend's family, and got some good things there, and I captured some nice images of the numerous topless bars that dotted the county roads.  I took a course at the university near me to learn photo serigraphy because I truly liked making images that weren't straight photographs.

When I went back to school in '78, I immediately signed up for another photo course though it was a strain on my time.  The prof was a recent graduate student who had been dubbed a star by my old most famous professors.  He was a thin, energetic hippie-type with long hair tied in the back, so I liked him right off.  The photography he liked, though, was nothing like the photos I'd been taught, nothing like Weston, Steiglitz, Steichen, Lange, Evans, Cartier-Bresson, White, et. al. that we had learned about before.  This fellow was about the new.  He taught us about Gilbert and George, a European artistic team that turned the old school on its head.  I don't remember who else we looked at, but I remember the strangeness of it.  Something must have sunk in, though.  The two rolls of color slides were shot, and then we all showed them in class on a slide projector.  No prints.  Just projections.  It seemed heretical.

I remember his reaction to my photos.  He was excited, and I was very pleased.

And that was the last I shot with color slide film, and after I left the university once again (that's another long story), my cameras were pretty much put away and forgotten for very long time.

How I weep now for not having done more.  But you will see what I did do here for awhile, and you can make your own decisions.

The slides are disintegrating now.  I had trouble scanning them.  The colors are all off.  I may go back and try to scan them with another software to see if I can't do better.  They all have a greenish-blue tint that fairly overwhelms them.  I've corrected for that somewhat, but I need to learn some things before I try to scan them again.

Detroit City looms.  Yesterday, Ili bought me a nice down sweater/jacket for the trip.  It will make the world of difference in what I have to pack.  I may have to buy a pair of walking boots, but I haven't made up my mind yet.  But I'd better.  We leave in twenty-four hours.

And today is a factory day, so I must go prepare.  I hope you like the slides.
Posted by cafe selavy at 6:55 AM